Microsoft has already warned you several times but it never hurts to remind the more distracted that as of July 13, computers with the Windows XP operating system that have previous versions or with Service Pack 2 (SP2) installed will no longer benefit from the company’s security update system.

The end of support also covers the Windows 2000 operating system, in the server and desktop version.

Users can continue to use online self-help information, but they can no longer rely on paid support and security updates.

In the case of Windows XP users there is also an easy way to maintain the operating system and not be without support: just install Service Pack 3 (SP3), available for free through Windows update or on this link. Who has Windows 2000 has a more difficult path to go, migrating directly to Windows 7 or in the server version to Windows Server 2003 or 2008.

However, this will be an “artificial extension, since Microsoft guarantees that in 2014” it will turn off support for XP.

With the launch of Windows 7, Microsoft decided to discontinue Windows XP, which had an abnormal life span due to the failure of Windows Vista. In June 2008 the company stopped selling this operating system, keeping it available for companies.

The latest figures from StatCounter for Portugal show that Windows XP remains the most used operating system, despite the growth of Windows 7, which already has a 17% market share. 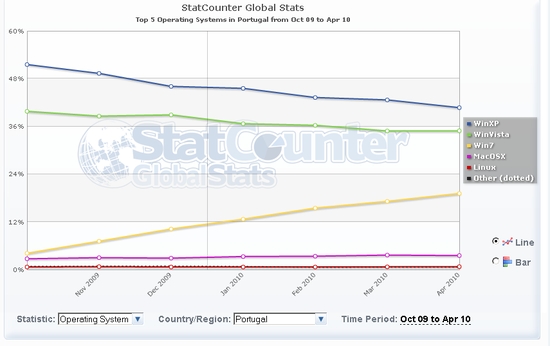 By the end of 2012, Microsoft intends to have all Windows Vista computers migrated to Windows 7, but in the forecasts it includes only 50% of Windows XP devices.