If you have been in the habit of using computers for at least 15 years, you may have noticed a drop in the machine's sense of agility over time which is paradoxical, considering the breakthrough of processing technologies, but a feeling indeed. palpable. Now the developer Dan Luu resolved to put this feeling to the test in the newest article on your site.

Luu took the most basic and quintessential action of the experience of using a computer the act of pressing a key and decided to compare its latency in a series of machines of different times with the most varied configurations possible. He positioned a very high frame rate camera and measured the milliseconds from the moment the key was pressed to the moment the character in question appears on the screen.

Here are the results: 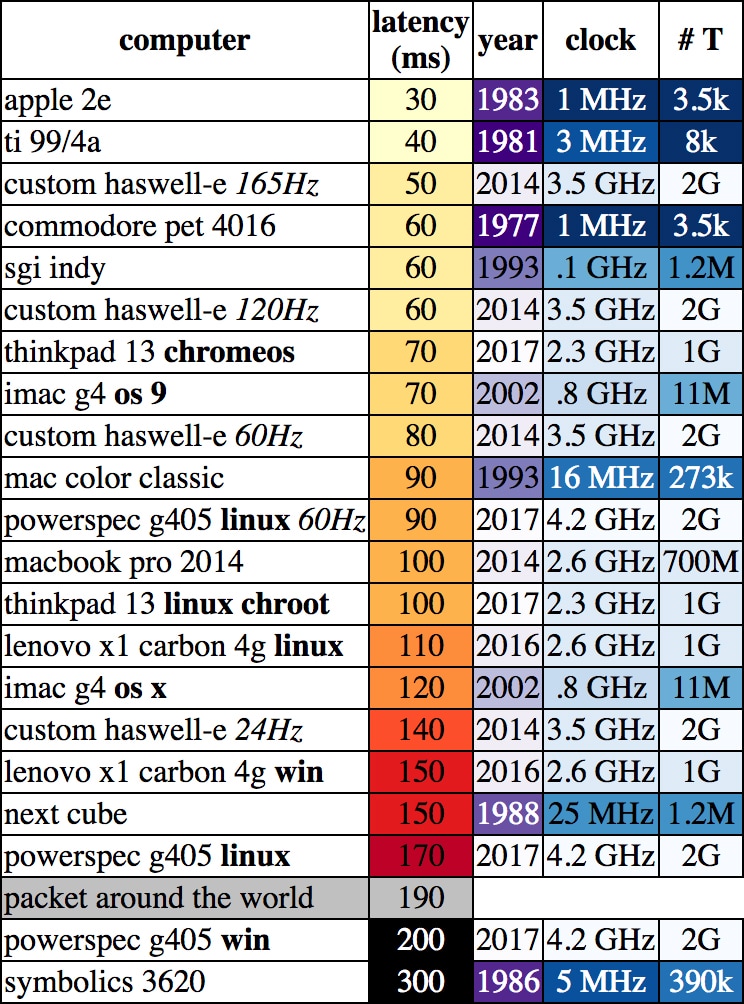 Surprisingly, the computer with the lowest latency among all tested was a Apple IIe, 1983, with just 30 milliseconds between keystroke and character appearance. Only a “recent” computer with very sturdy specs could come close, with a time of 50ms, while other popular machines like the 2014 MacBook Pro achieved much slower numbers.

The reason older machines outperform newer machines in very simple latency: complexity. According to Luu, the Apple II system code is made in such a way that keyboard actions are recorded almost immediately, without the computer having to deal with other processes running concurrently as is well known, a modern machine has millions of processes going on. At the same time, then you can not give the same "level of attention" to the keyboard.

Interestingly, even with touch devices, only one could match the Apple IIe: the 10.5 inch iPad Pro, and yet, only with the use of Apple Pencil a normal touch, in turn, took 70ms to be registered.

This touchscreen latency table, by the way, also serves to prove something we all already know: Overall, iOS has a much faster touch response than other mobile operating systems.

And, were you surprised by the results? What do you have to say about the topic? Leave your impressions below.