Telecommunications continues to be the area that generates the highest volume of consumer complaints to DECO, which in 2009 received around 380 thousand complaints, a third of which in this area. The most targeted companies remain those of the PT, ZON, Sonae and Vodafone group.

Internet access and speed of connections lead users’ complaints, as well as problems arising from triple play. Ringtones and games on mobile phones are also among the top complaints, although this area was subject to regulation last year, becoming part of value added services.

Last year, the Directorate-General for Consumers had already assumed that the ringing and games area was one that had generated a large increase in complaints from service users, at the beginning of the year, before the new legislation came into force.

The balance of complaints presented to the Consumer Protection Association was presented today and shows a 19% growth compared to last year. The banking and purchasing and sales sectors were the second and third largest complaints generators. 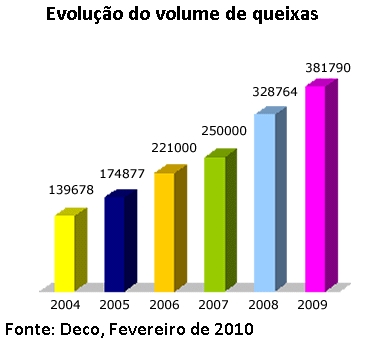