The folks at ARS Technica have made a comparative analysis of the performance of new Steam Machines coming to market with Linux-based SteamOS and Windows 10, the latest version of Microsoft's system.

The staff of ARS Technica made a comparative analysis of the performance of new Steam Machines coming to market with Linux-based SteamOS and Windows 10, the latest version of Microsoft's system.

Still not all that can be

A comparative analysis has shown that Linux still does not offer all the potential it can offer, largely due to OpenGL. The ARS Technica test dual-installed Windows 10 with SteamOS on a newly launched Steam Machine to do some tests. To test both systems they used the Geekbench to make benchmarks, where windows 10 had a slight advantage, nothing very significant, to compare games were used, Shadow Of Mordor and Metro: Last Light Redux, both games with very heavy graphics.

After we tested some games that use Source 2, Valve's Engine, let's check out the graphics:

As we can see from the graphs, in almost every test Windows 10 performed considerably better, you can see the hardware used below: 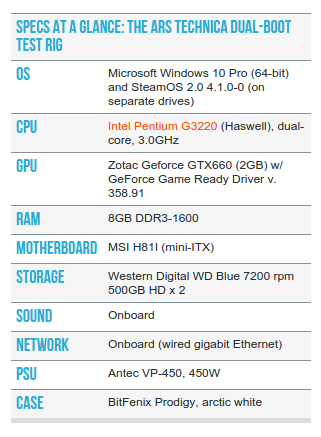 As we can see there is still a road to go, although we now have many perfectly playable titles on Linux, the hardware requirement for most games is still higher than that required for Windows, this is due to the optimization of games, the optimization of the video drivers for Linux, especially AMD, and also the technical limitations that OpenGL still has, these limitations that should go away with Vulkan, but to be sure of that only when the new API starts to be used.