THE Skydio recently released a new firmware update for your drone Skydio 2 – a verse 5.41.77. According to the company, this update focuses on flight performance, tracking updates and critical flight bug fixes.

By improving flight range and control distance, it would be a perfect drone in specs.

In addition to this general information, Skydio did not delve deeper into the improvements that come with the upgrade. However, Haye Kesteloo from DroneDJ gave an interesting clue as he told his experience. According to him, when inserting a 64GB SD card in the aircraft, a warning appeared in the Skydio application saying that The storage card was too slow to record videos.

"I thought it was an interesting feature. At least you were informed before leaving and flying the drone." – Haye Kesteloo.

The firmware update is quick and simple to do, taking about five minutes. The Skydio app downloads to your smartphone and, once completed, updates the drone.

If the pilot uses the Beacon control, it also needs to be updated. With this second procedure done, s connect the device to the phone for a stronger signal and start the flight. can find More information about the upgrade process here. 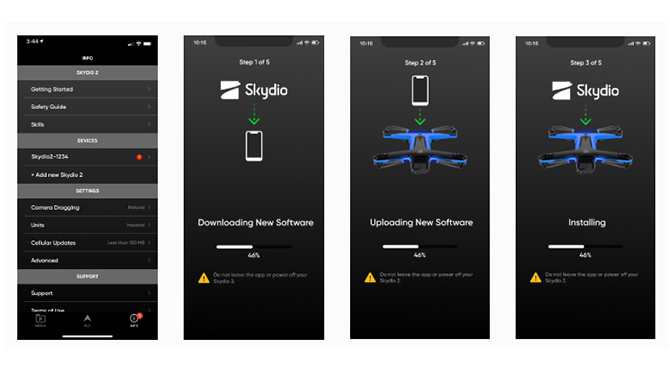 Skydio 2 was announced early October this year with a promise to transform the drone market. It represents the best we have so far in autonomous resources And the company has so relied on its product that it has come to defy the consumer: if you, or even a child, could hit the drone while flying, the purchased ship would be repaired or replaced free.

To be sure of the level of this drone, Skydio 2 is a strong competitor of DJI Mavic 2 Pro [review him here].

The drone weighs less than 1kg, can reach the maximum speed of about 60km / h, record in 4K 60fps and stay in the air autonomously for at 23 minutes. As a main processor, we have a Tegra X2 gives Nvidia.

Each batch of Skydio 2 drones features limited units. The first batch, made available at the time of the launch, began to be sent to pilots in late November. The second drone drones will reach their buyers in the second half of next year.

For those interested in more details about Skydio 2, be sure to check out our article about him here in the Connected World.