Developers working with iPhone OS 3.0 beta have reported that Japanese information about Ashi Kasei is indicated in some system code files, properly placed in a folder called “compass” (digital compass). This company specializes in solutions for various fields in the electronics industry and supplied components for the first generation of iPod touch, by the end of the first quarter of 2008.

The files found identify a sensor produced by Asahi whose serial code AK8973. It is a 16-pin component with 4 square millimeters of area and 0.7 mm thick, capable of detecting directions electronically. It is not known whether this is the only component the company will supply to the future device, as it specializes in the production of other products in which Apple may be interested.

Among them, a category of submerged indicators stands out, something that Apple has been putting in its portable products for the past two years to help its technicians determine malfunctions related to the contact of the devices with water, which is not covered by the warranty .

Below is an electrical diagram of the component mentioned by the iPhone OS 3.0 files: 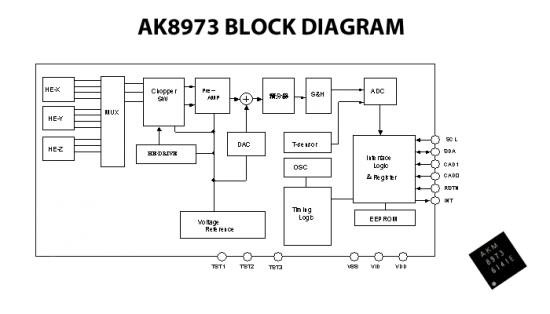 The presence of this device is important, as the current iPhone is not able to detect the direction in which it points, even counting the accelerometers that control the inclination level of the device. Among other components that are to come in the third generation of the iPhone, there is a camera with video support and an 802.11n Wi-Fi chip in low power mode.