My name Rodolfo Diniz Biazi, I am 24 years old, I am a student (studying Design at PUCPR; Apple Developer Academy ambassador of Curitiba) and I was one of many Brazilians who won a scholarship to attend the WWDC19. This video tells a bit about how I developed my project:

Below I tell you what it was like to attend Ma's biggest annual event.

We stayed in the dorms offered by Apple, located in San Jose University. It is only a few blocks from the McEnery Convention Center, where WWDC19 took place, but a student van was still offered to go to the conference center.

Each dorm room was split between two scholarship recipients, a great opportunity to meet young developers from somewhere else in the world!

The beginning of the event

The week-long conference begins on Monday with a keynote presentation led by the company's CEO, Tim Cook, and ends late Friday afternoon. But as usual, the process of check in it started Sunday morning at the convention center.

After facing a line (with several super excited employees), we received the WWDC19 badge and giveaways, which this year included a reversible jacket, a variety of pins Apple related and a special t-shirt for the scholarship winners. 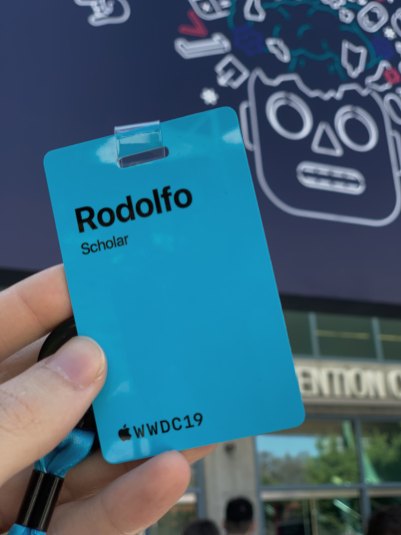 Soon after we went to the Kickoff, an event organized by Apple for fellows. O Kickoff it happened at Discovery Meadow, a park across the street from the convention center. There had food trucks, games and music. There were also employees from various areas of Apple, from engineers to recruiters, ready to answer student questions.

The conference, as usual, started with the main keynote. As fellows, we had reserved places at the opening presentation and an exclusive lounge throughout the week. In addition to the keynote, the conference formed by laboratories (labs) and sessions (sessions).

Saguo where developers meet to have lunch and schedule.

Hourly, several sessions happen simultaneously, and the biggest problem is choosing which one to go to. But there is also no problem losing your sessions, since they are all recorded (except for calls lunchtimes sessions, which are exclusive sessions for those present with professionals from different areas) and available on the website and in the app.

The suggestion that stays here goes as far as labs possible!

The labs were a much anticipated part of everyone at the event. They are the chance to present their projects to company employees and receive feedbacks. The labs They are open for everyone, but for the most popular, it is recommended to make an appointment or you have to wait some time.

Personally, the accessibility laboratory It was very remarkable for me. There were Apple engineers with some kind of disability ready to test the project of anyone who made an appointment. They tested a personal project and gave me several feedbacks how to make the app inclusive for users who have physical limitations.

O design laboratory One of the most disputed, and having direct contact with a professional who helps to create the system in which you develop was an unmissable opportunity!

In addition to the chocolates and afternoon snacks, a great success was the Swift strike, experience in augmented reality in the hall of the conference. The game multiplayer ARKit 3 used Occlusion technology; This meant that players could walk in front of and behind virtual objects, and even lock them, as if they were actually behind the bowling ball. While this may seem like a small addition, perspective everything when it comes to AR, and being able to physically move around an AR object adds a significant total immersed amount.

Finally, on Thursday we had the Bash, a party that happened in the same park of Kickoff; In addition to a Weezer concert, we had Craig Federighi, Apple's senior vice president of software engineering.

The trip was certainly a great opportunity for me to meet people from the development area because there are a lot of events going on in the city of San Jose and around the convention center this week.

Every moment was an opportunity to network with new people and connect with area professionals, whether in a session or a post-conference event. In my opinion, this is the real value of all this experience. 😊