Always plugged in and in standby mode stand by, the devices used to connect cable TV, IPTV or satellite services have significant electricity consumption, which can be reduced in the interests of saving electricity bills and CO2 emissions into the atmosphere. The conclusion is from a study by Quercus that today will be handed over to operators and Anacom, from whom the environmentalist association wants a more active stance in this matter.

The association’s analysis shows that the cost of keeping these appliances on can rise to 50 euros a year, representing more than 10% of the electricity consumption of an average household and more than 1% of the country’s total electricity consumption. In addition to the bill paid by the consumer, this consumption is reflected in the emissions of carbon dioxide into the atmosphere, calculating Quercus which represents an emission of approximately 300 thousand tons / year of carbon dioxide.

The measurements were carried out reproducing the environment of two households that use subscription TV services Meo and Zon, with the connection of two televisions and the Internet. The study explains that the worst situation in terms of consumption was considered as the one in which the equipment is always on. The difference for the stand-by situation is however short, reducing consumption by only 5 to 6%.

The table below shows the consumption for each of the analyzed equipment. 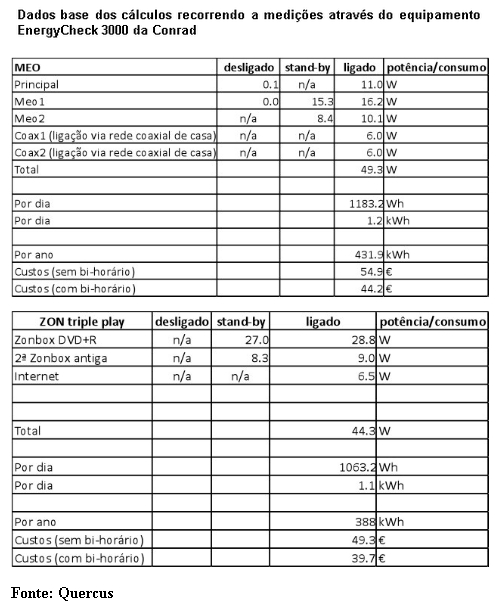 Along with delivering the results of the study to operators Portugal Telecom, Zon and Cabovisão, and Anacom, Quercus wants them to take a more active position, transmitting this information to consumers with information campaigns, but also through the sale of equipment with lower energy consumption and automatic saving functions, which are in line with European directives.

It is recalled that in 2007 the Energy Saving Trust (EST) presented a report which shows that the proliferation of home entertainment systems, such as flat screens, digital radios, laptops, video game consoles and other products with higher energy requirements will be responsible for close 50 percent of the total electricity spent in British households.