Portuguese sites do not look good in the picture taken by MarketWare in the Internet Performance and Availability Index in Portugal. In general, the performance of national websites has worsened in the last seven years, with the e-Commerce sector having the worst results.

The company has been monitoring the behavior of the Internet for the last seven years for the sites in Portugal, Spain and Italy and, contrary to what one would expect, reveals the existence of a “significant slowdown in the quality of service in terms of performance “.

The responsiveness of the sites is slower, which MarketWare attributes to the increase in bandwidth consumption by users, which is not compensated on the side of national servers with the necessary investment in infrastructure.

“The vast majority of the analyzed sites have substantial load symptoms that are clear at certain times during office hours, with lower bandwidths than a single customer can obtain,” says the analysis.

Even so, the ONI website was considered the fastest in a list of the 30 main sites in the most representative sectors. Among the banks, the distinction goes to Millennium BCP, the slowest being Barclays.

At the end of the table for these 30 sites is Staples and the Santa Casa Games. 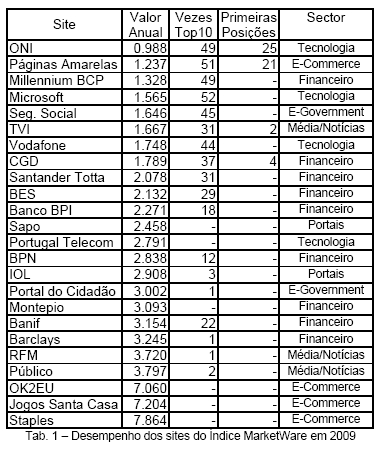 By sectors, the sites in the Technology area have the best overall performance, while those in Electronic Commerce have the worst qualifications.

Although in an analysis of the last seven years the performance of the sites worsened, there was an improvement of 5% between 2008 and 2009. But, in terms of availability of the sites, the evolution was globally negative, with the majority of sites registering decreases relatively previous year.

The Marketware report stresses that there is still a lot to do on national sites in the area of ​​performance, namely in periods of greater demand from customers.