The financial results presented today by Portugal Telecom reflect the capital gains obtained from the sale of the stake in Vivo, causing the operator’s profits to skyrocket to 5.6 billion euros in the first nine months of this year. The Board of Directors proposed the payment of an exceptional dividend to shareholders of 1.65 euros per share, of which 1 euro will be paid until December and the remaining 0.65 euros until May 2011.

In the statement delivered to the Securities Market Commission, the company states that consolidated operating revenues totaled 2.79 billion euros, growing 0.7% over the previous year, but EBITDA registered an opposite movement, decreasing to 4 , 1%, standing at 1.129 million euros.

In operations in Portugal, revenues registered the negative impact of the crisis, decreasing by 3%, mainly affected by TMN’s drop in equipment sales and a drop in customer revenues.

In total, the group’s mobile operator recorded a drop of 7.9% in revenues, to 1.1 billion euros, which were offset by the slight increase in the fixed business, where revenues increased 0.4% to 1.452 billion euros. 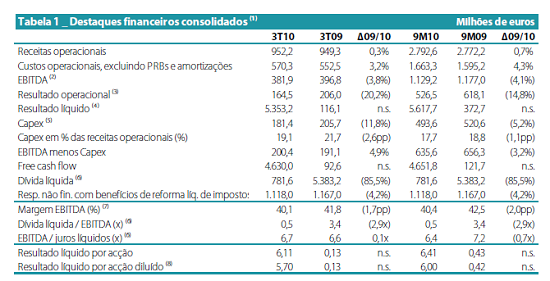 Triple play is once again responsible for this growth, with 239 thousand new customers being reached in the first nine months of the year, 10.6% more than in 2009.

Meanwhile, PT has also clarified the destination it will give to the money it earmarked with the sale of its position in Vivo to Telefónica. Jornal de Negócios now writes that PT will allocate 80% of this proceeds to reinvest in the company itself.

As previously mentioned, of the 7.5 billion euros, 3.5 billion euros will be invested in the acquisition of Oi. Another 30% is reserved to invest in other businesses (namely expansion in new geographic areas) and the remaining 1, 5 billion to be distributed to shareholders, in the special dividend we have already mentioned and which will be partially paid later this year.

Among the defined investment priorities is fiber, where PT proposes to cover another 600 thousand homes. The launch of the fourth mobile generation will also receive a slice of the company’s investment, as well as investment in the geographies that PT has already identified as priorities: Africa, Brazil and Portugal.

After the presentation of the results, Portugal Telecom’s securities continued to trade strongly, boosting the Portuguese stock market.