Internet consumption has already surpassed television in the United States, but visits to television sites continue to increase, also in Portugal. The latest Marktest figures indicate that in November 2010, 1.556 million Portuguese people accessed these sites, with TVI maintaining the leadership it conquered in October.

The data are the result of the Netpanel study and show an increase of 0.6% compared to the previous month, and 3% compared to the same period last year. The trend is most visible in the daily average of visitors, which grew 9%, and in the pages visited, which increased 3.9%, but also in the total time spent online.

During the month of November, each user visited an average of 21 pages linked to television channels, in a total of more than 32 million page views.

In terms of browsing time, the accumulated number of hours rose to 548 thousand hours, an average of 21 minutes per user. These figures are 13.7% above that recorded in October and represent 43% more than those recorded in November 2009.

TVI remains the leader in the most viewed channels on the Internet, with 744 thousand unique users, followed by SIC online, with 530 thousand unique users. RTP has 500 thousand visitors. The TVI and RTP sites registered little significant growth, but SIC’s reduced the number of unique visitors and pages visited. 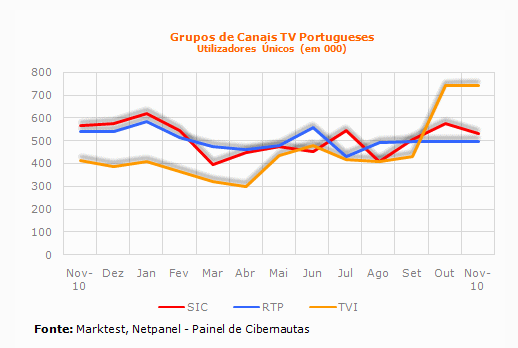