O Airpower It was announced with the iPhones X and 8/8 Plus in September 2017, but Apple is taking so long to finally release it that other manufacturers are already coming up with similar options, including its partner Belkin and some Chinese companies.

The idea of ​​charging multiple devices is so good that it became an Indiegogo campaign, but with some advantages: know the Plux, the surface capable of carrying up to three devices simultaneously. 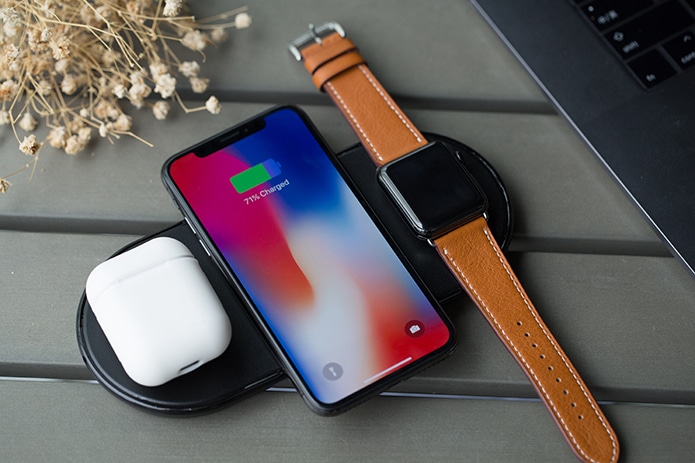 Although the intention is similar to what is already on the market, Plux has, in addition to a loading surface (its pad), one stand which allows your devices to be charged but positioned vertically. In addition, it delivers 10W Qi-standard fast charging, compared to 7.5W from most competitors, including AirPower.

The biggest attraction in this gadget undoubtedly its price: while Ma's option could cost $ 200 (this, of course, based on a distant rumor a few months ago) and others like Belkin's cost at least $ 60, Plux would go for just $ 40!

With it, you can also recharge your AirPods and you don't even need to buy a new case that works wirelessly as it comes with an adapter to connect to your AirPods. case and, so that it doesn't have a “tricky” finish, they still give a cover to put around the case to hide it, thus:

If you need to charge your Apple Watch, you also need to dock your own charger, but the cable is well hidden behind the pad, without any visual pollution.

There is no doubt that when Apple officially launches its wireless charger, it will be a much "rounder" option, without "cheating". Still, Plux has a very good appeal for its price, much lower than AirPower's.

Here's the official video of the project:

Plux managers were looking to reach a minimum of $ 5,000 by next month, but they've already made over $ 60,000 with nearly 1,300 contributors! If you enjoyed it and would like to purchase one, you can contribute values ​​starting at $ 40 on the Indiegogo project page and be entitled to pad, to stand, a USB-C cable, the receiver, and the adapter for your AirPods.