“2009 was an amazing year for many people, even for us who entered the market in April and only had the complete line of products in June”, explains Rafael Martinez, general director of Nintendo Ibérica.

According to GfK figures, the video game market in Portugal (hardware and software) was worth 183.83 million euros in 2009, a growth of 17.6% over 2008, which is above the values ​​recorded in Europe. 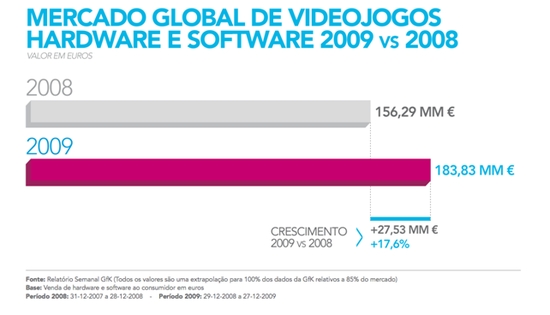 On the Nintendo side, the numbers are also very positive. Wii’s sales grew 144% to 26.13 million euros, while Nintendo DS (the handheld console) rose to 20.8 million euros, an increase of 41%. 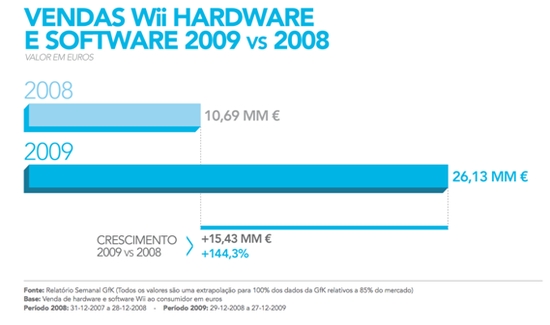 The company estimates that Wii’s market share was 30.2% at the end of December 2009, after more than doubling the amount reached in the same period last year, but not stealing significant share from the main competitor (Sony with PlayStation ) held 39.2%, down just over 1% since 2008.

For 2010, and despite the launch of several critical products for the company, such as the Nintendo DS XL, which starts selling at 180 euros tomorrow, the company does not expect to maintain the growth rates recorded this year. “We hope to continue to grow, but not at the same pace. […] If we manage to grow half of what we grew in 2009 it will be very good “, admitted Rafael Martinez in response to TeK.

The social aspect of games and the attraction of new users to this market will continue to be a strong bet of the company that has managed to differentiate itself from Sony and Microsoft with more “familiar” games and the offer of security zones and educational content.

But the failure to offer more localized games for Portuguese will continue to be felt in the coming months. The general director of Nintendo Ibérica admitted that although the location of the software is critical and confirming that “the issue is on the table”, he does not know when that possibility could be realized because it does not depend only on the Iberian subsidiary.