THE DJI featured in just a new drone called Storm, as a completely new division for their business: the DJI Studio. This is an area of ??the company that was designed to offer customized cinematography services including crews, trucks and custom drones.

The product works with Matrice 210 and Matrice 600 aircraft.

The new unmanned aircraft, DJI Storm, is primarily intended for heavy photography work. His release came wrapped in a good deal of secrets through a video posted by the manufacturer on YouTube in January 2019. It had no publicity and had only about 800 views until the international press discovered it. Since then, the trailer has been watched over 27,000 times.

Integrated into the new drone is the Ronin-2 gimbal, while its landing gear consists of three non-retractable legs. Their engines have not been officially confirmed, but carry the M10 100-10 KV120, Made in China, and a serial number beyond the DJI Propulsion Laboratory brand.

According to the Drone DJ website, the Storm has a top speed of 80km / h with a flight time of 8 to 15 minutes. They can operate at temperatures ranging from -10C to 40C, with batteries that can be changed quickly to continue shooting.

DJI Storm can operate in conjunction with other company products such as Masterwheels it's the Force pro. Its hiring includes an entire operating team and a dedicated production vehicle with uninterrupted power supply. 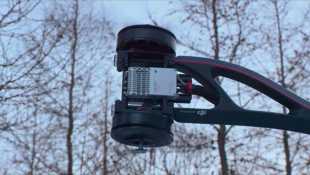 It is unknown whether the DJI Studio service and the DJI Storm drone will be offered in other countries, such as the United States or Brazil. Nonetheless, it seems to be a very suitable service for big Hollywood productions and even TV series that don't have such a high budget. Even so, the video gives the impression that the service will be more focused on Asia, with the possibility of expanding to Australia and New Zealand. These countries have more permissive drone use legislation.