Every Thursday Apple picks one Movie of the week iTunes Store, whose purchase (even at 4K / HDR, depending on production) comes R $ 9.90. The title selected this time was “Skyscraper: Courage Without Limit”, with Dwayne "The Rock" Johnson.

Global icon Dwayne Johnson leads the cast of Legendary “Skyscraper: No Courage” as Will Sawyer, a war veteran and former leader of the FBI rescue operation, who now evaluates skyscraper safety. On a mission in China, he finds the safest and tallest building in the world on fire, and is guilty of it. Will must find those responsible for the fire, clear his name and somehow rescue his family who are trapped inside the building above the fire line.

Here we have a mix of the movies Hell in the Tower and Hard to Kill. Indeed, Dwayne Johnson quoted in one of his interviews to promote the film that this was a tribute to the two. We have a script that clearly validated itself from several such films, a regular cast and culminating in a reasonable result. This is for sure a popcorn movie that introduces us to two hours of adventure and nothing more. 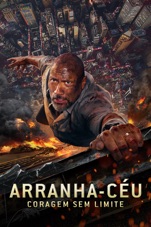