Every Thursday Apple picks one Movie of the week iTunes Store, whose purchase (even at 4K / HDR, depending on production) comes R $ 9.90. The title selected this time was “Circle of Fire: The Uprising”, with John Boyega.

John Boyega ("Star Wars" series) is the rebel Jake Pentecost, a promising pilot Jaeger, whose legendary father gave his life to ensure humanity's victory against the monstrous "Kaiju". Now an even more frightening alien threat has emerged in the world and Jake has been called back to, by his former co-pilot, Lambert (Scott Eastwood), and a 15-year-old Jaeger hacker, Amara (Cailee Spaeny). Created to become the most powerful defensive walking on earth, they live a spectacular new adventure of monumental proportions.

I know sequences are complicated, saved rare exceptions and in this case it was no different. The first movie of the franchise was interesting, not so much, even though it brings us memories of Specterman, Jaspion, among others with their final robot battles. vs. Monsters The shallow script, we are not presented with anything new, the reasonable cast and the result, in the same line. My recommendation is that if you like the genre or miss that Japanese series that marked generations, go deep! No more, wait for next week's movie. 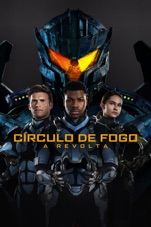 Circle of Fire: The Uprising