The study had been done on a global level by IDC, at the request of Microsoft, but the Portuguese reality is now detailed by the branch of the Redmond company, showing that this year companies linked to the Microsoft universe, including partners and suppliers, should generate revenue. € 1.6 billion, investing € 526 million in the national economy.

The study of the impact generated by the so-called Microsoft ecosystem is done annually and in the global data indicate that in 2009, a profit of US $ 537 billion could be generated. “For every dollar the company earns, our partners earn $ 8.7,” assures Microsoft.

For Portugal the estimated ratio is higher, and for each euro generated by Microsoft, partners must earn 10.53 euros. Of this amount 7.36 euros will be absorbed by hardware companies, 1.21 by software companies and 1.96 euros by service companies. 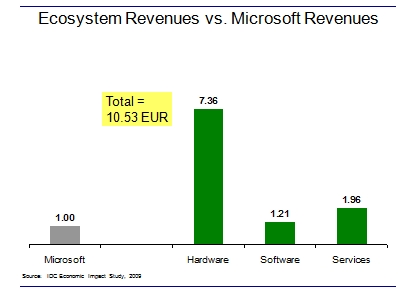 Regarding the evolution of the Portuguese market, the study predicts that spending on Information Technologies in 2009 will be 3.8 billion euros, an annual growth of 2.8% per year, in a positive movement in relation to GDP that will have a down 0.2% per year.

In terms of employment, IDC estimates that the number of professionals employed in the IT industry could rise by 7,500 in the next four years, adding to the 99,000 jobs in 2009 in this area.

The positive movement of the sector means that the consultant also anticipates the creation of 400 new companies by the end of 2013.

Speaking to Jornal de Negócios about this study, Cláudia Goya, general manager of Microsoft Portugal, admitted that the company is already “feeling some positive signs from the market, especially from companies that have made this period an opportunity to review processes and fine-tune their efficiency engines “.

The companies that are managing to face the crisis more efficiently are those that have not only invested in cost reduction, but have controlled costs while investing in innovation, says the same official who anticipates an economic recovery in the consumer market for 2010 and is expecting that the new Windows may bring some dynamics.

Editor’s Note: The news was updated in reference to the year of the study.