Among the news presented by Ma in last week's keynote, the coolest (or at least surprising) is the name of Apple card.

The company's credit card has already had several details unraveled at the event itself, such as the absence of fees, the benefit program that effectively gives back a portion of the money spent on purchases made with it, the joint venture with Mastercard and the bank. Goldman Sachs, the world's finest titanium physical card (for non-Apple Pay locations), and the service's beautiful digital interface (with machine-learning touches to separate your purchases by categories and give you advice on how to pay your invoices). so as not to get into debt).

Other details, however, were left out of the presentation and that is exactly why we are here.

Recently, journalist Matthew Panzarino of the TechCrunch, has published a story covering some of this unreported information and curiosities about the Apple Card and we will comment on it now.

Firstly, it is worth noting that the Apple Card is treated by Apple in the same way as its other products and services; this, the features and benefits presented in this first version will be improved soon, and the platform will continue to evolve through verses Today, of course, we are in “version 1.0,” and what lies ahead may make the card even more attractive.

It is also worth noting that, at least in this early version, at the Support for Family Sharing or multiple users with the same account: An Apple ID is an Apple Card, and only that different people need completely separate accounts.

Nevertheless, the Apple Card is very affordable: as announced by Ma at the event, the service has no fees or annual fee and the physical card is completely free. More than that, no charge for loss or theft charges if your card goes astray, simply lock it quickly through the app and request a new one from Apple, completely free of charge.

To activate an Apple Card (either a first-way or possible replacement), there's no need to call Apple or do any in-app operation: just touch the card on your iPhone and everything will be automatically enabled even with a special little animation, as we have already shown on our Instagram.

Another important thing to keep in mind: even with this iPhone tap feature to activate, the physical Apple Card does not support contactless payments (like Nubank's latest cards, for example) you will have to resort to the archaic method of sticking the card into the merchant's payment machine. It makes sense: if the place accepts contactless payments, it is very likely that it will accept Apple Pay, and in this case you don't even need the card, just use your iPhone or Apple Watch to complete the purchase.

One more interesting point: the user never have access to the “itself” number on your Apple Card which, as everyone already knows, will not come on the card. Only the last four digits can be viewed, and you can get temporary numbers (as well as security codes) for online shopping through the app, increasing security. The numbers may be semi-permanent for you to save to subscription services such as Netflix, but they will never match the actual card number.

Cheaper but not so much

Speaking of interest rates, Apple boasts one of the lowest of all credit cards in the United States, but according to Apple Card literacy, the rate ranges from 13.24% to 24.24%. It does not differ much from most of the country's credit services. What puts Ma in a good position are some additional advantages: the interest rate not be increased as the customer delays the payment of the invoice, for example. Your credit score is still going down and you still have to pay the interest due, of course, but the rate stays the same all the time.

In relation to international shopping, as there is already commented by Ma additional charges for this type of transaction. It should be noted, however, that the exchange rate for purchases made in foreign currencies will be determined by Mastercard, not Apple.

Finally, a cool curiosity: As we all know, Apple uses artificial intelligence to separate its Apple Card purchases by categories (and thereby give you an overview of your spending pattern and help you contain expenses). These categories are color coded, being pink for entertainment, orange for food, yellow for shopping, and so on.

The cool part: The digital Apple Card, which appears at the top of the app, has a color gradient based exactly on the ratio of your spending, as designer Maksim Petriv noted:

Anyone else notice this? Looks like the gradient on Apple Card is directly tied to transaction categories from your spending pattern. #applecard @viticci @reneritchie @gruber #uxdesign pic.twitter/KR5CJW6nyh

Has anyone else noticed this? It seems that the gradient on the Apple Card is directly linked to the shopping categories in their spending pattern.

With this, even in the digital environment, each customer has a totally unique card. Cool, isn't it?

If the above details were sufficient to trigger your interest in Apple's credit card, please be aware that you are not in the minority: according to a survey by Business insider, 85% of iPhone users are interested in the Apple Card. 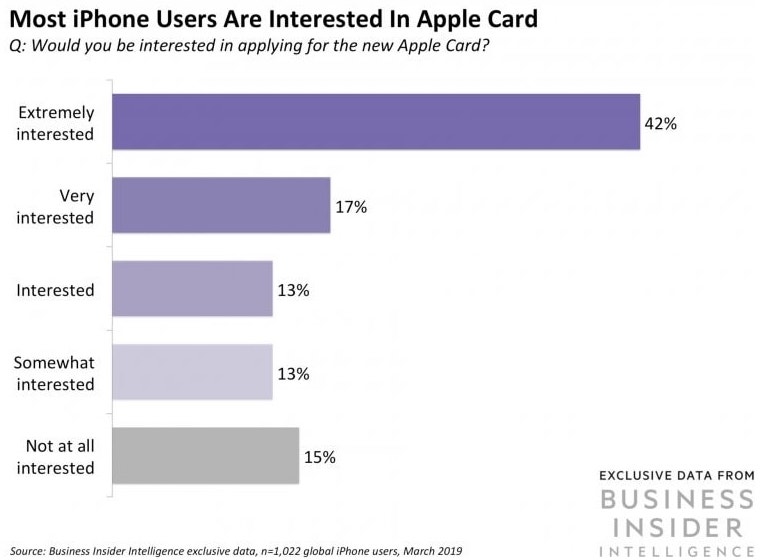 The Apple Card can also leverage the use of Apple Pay, especially because of the benefits of the card benefits program as Ma announced, Apple Pay purchases on your card will get 2% of the amount spent, while purchases made by the physical card will have one cashback of 1%. As a result, nearly half of respondents said it is "much more likely" to use Apple Pay with the Apple Card. 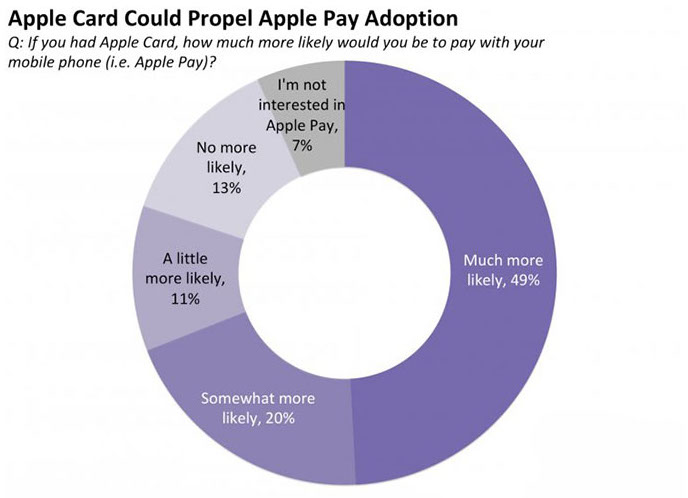 Of course, if you live in Brazil or anywhere other than the US, you will have to sit around: for now, the Apple Card is scheduled to arrive only at Ma's homeland. But they are really interesting prospects, aren't they?