Last time we talked about sales of Macs and the computer market at the beginning of the year, Apple had little to complain about: sales were stable, with a slight year-on-year increase; Although fifth place in market share among manufacturers was not the most honorable in the world, it was a reasonably acceptable situation.

Now data for the third quarter of 2017 has arrived and Apple can turn on the yellow light l in its computer division. Or not: it all depends on the source chosen to analyze the scenario.

THE Gartner It was one of two firms that brought their surveys about the performance of the computer industry, and of the two that presented the most worrying situation for Ma. According to the company, the PC market fell by 3.6%. in general sales in the third quarter over the same period last year was a decade mainly driven by the United States, where the index reached a negative 10% (already in other markets such as Japan and Latin America, sales remained relatively stable) .

In this survey, Apple's drop was even greater than that of the industry: if in the third quarter of 2016 approximately 4.9 million Macs were shipped, this year's figure dropped to about 4.6 million, down 5, 6%. As a result, Ma returned to fifth place among manufacturers (it had risen briefly to fourth in the second quarter), with a market share of 6.9% behind respectively HP (the only one with sales growth), Lenovo, Dell and ASUS.

In total, there were approximately 67 million computers shipped worldwide in the third quarter of 2017, compared to 69.5 million shipped in the same period last year. 12 consecutive quarter with a shrinking market. Did smartphones and tablets really shake the world, really?

The other industry survey comes from IDC and, according to firm estimates, Apple is not in such a raging sea. Here, the shrinkage of the PC market is much smaller, with 67.1 million units shipped in the last quarter counts 67.4 million in the same period last year (down 0.5%). Ma, in turn, had a slight increase of 0.3% year-on-year by 4.9 million compared to 4.8 million dispatched units, which secured fourth place in market share, with an index of 7.3%. 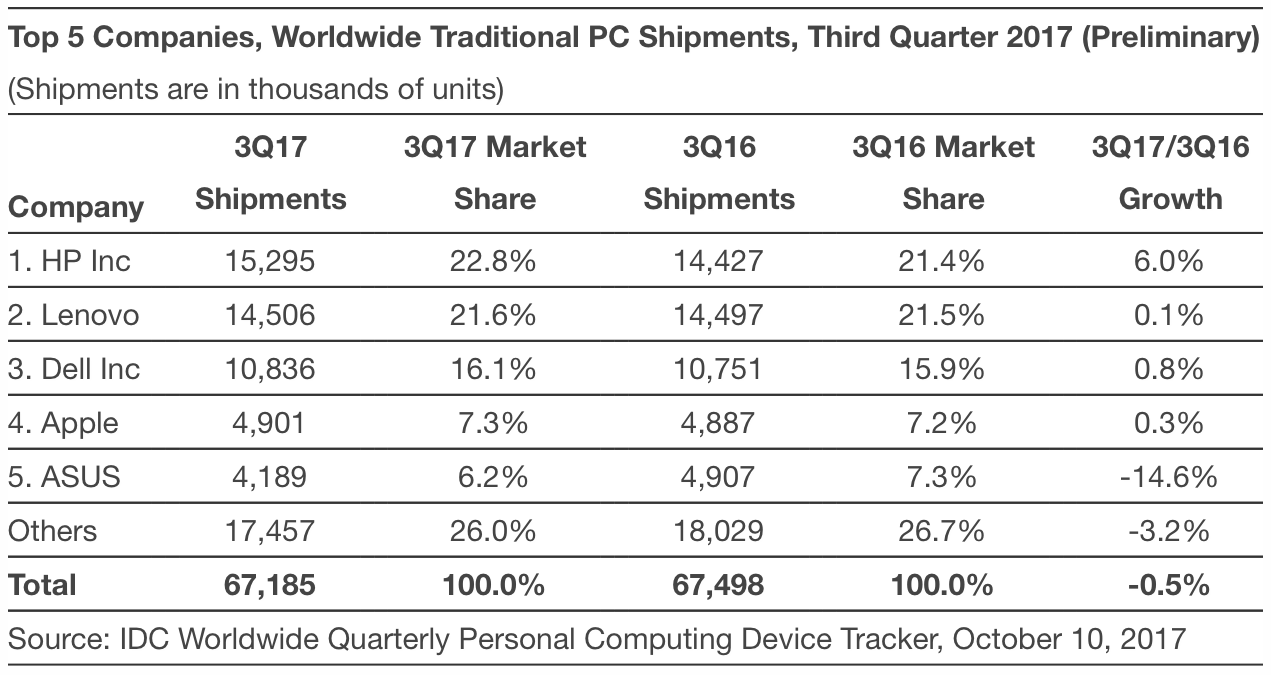 Whatever research you choose to look at, one thing to remember is a very important one: last quarter was the first for sales of updated iMacs and MacBooks (Pro / Air), and in other circumstances, we would see a leap in the pace. sales as normal when new products are launched. If both IDC and Gartner numbers tell us something, that the public's interest in Ma's computers, from a global point of view, is cooling down, by the way, even faster than the interest in computers in general, which is a trend. inevitable.

Perhaps it is time for Apple to make a choice: either it admits that it has become a mostly mobile device company and significantly shrinks its line of Macs (keeping, say, just one model so that it can focus more hard on it) or goes back to give more attention to their computers, bringing more appeal to loyal customers or potential new consumers. Apple has cash in hand to do the crazy thing about Macs for decades, but as it stands, the situation is far from ideal.