Last night, Apple released its financial results for the second fiscal quarter of 2019, but it no longer reports how many products it sold by units – it just divides segments by revenue. Thus, we have no way of officially knowing how many iPhones were sold from January to March.

What we know from the numbers is that the iPhone had a 17.3% annual drop in revenue (totaling $ 31.1 billion). And, since the entire line is now more expensive, it is natural that the annual drop in units was (much) more accentuated than that.

Based on market research, the International Data Corporation (IDC) estimates exactly that: in the first quarter of 2019, Apple would have sold 36.4 million iPhones – which would represent an incredible retraction of 30.2%.

THE Samsung, a Xiaomi and the OPPO also had annual decreases in their sales, of 8.1%, 10.2% and 6%, respectively. Who shot positively was the Huawei, 50.3%, followed by Live with 24%. Overall, however, the smartphone market as a whole retracted 6.6% earlier this year.

The fall of Apple added to the surge in Huawei, obviously, made them both switch positions in the ranking. If the Chinese continues at this pace, it may even threaten Samsung’s leadership in the not-too-distant future.

From January to March, IDC estimates that all manufacturers together sold a total of 310.8 million smartphones. It is the sixth consecutive quarter of decline in the segment.

Now it was the Canalys to publish your survey, and it has some very different numbers from those of IDC. 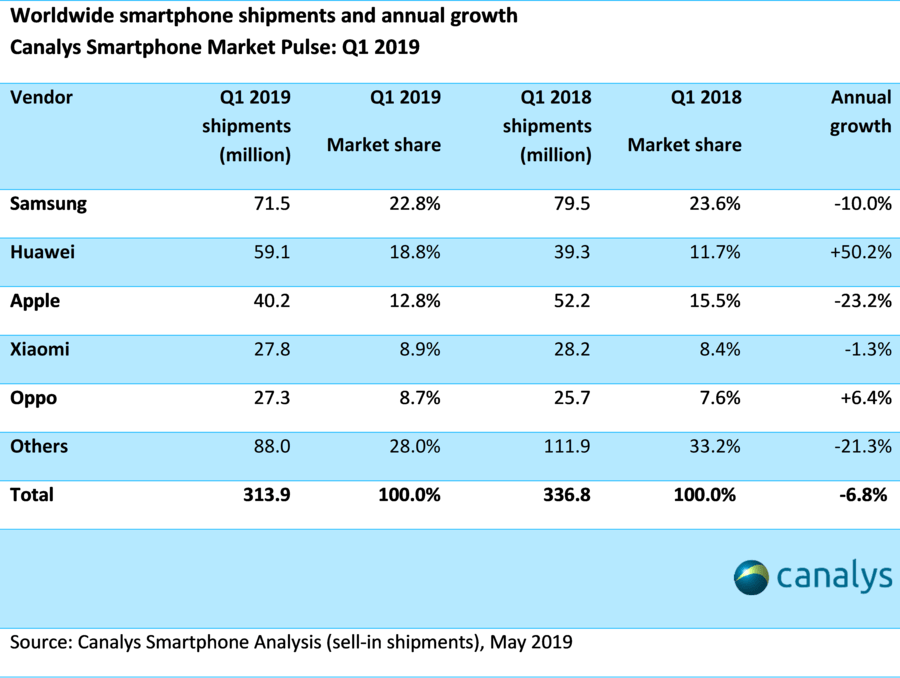 The two firms almost agree on the overall decline in the smartphone segment, differing by just 0.2 percentage point – although Canalys cites a higher total of 313.9 million devices sold in the period.

That gives, Apple no longer disclose the official sales figures for iPhones. Now it was the IHS to publicize your research (via 9to5Mac), and it points to an even lower annual drop in Apple than Canalys.

The total market was not much different from the others (annual drop of 6.3% to 323.8 million smartphones sold in the quarter), but IHS says that Apple sold 43.8 million iPhones – which would represent a annual drop of “only” 16%. It is almost half the IDC bet.

We also had variations here and there in the other brands, but the consensus among all is that Samsung had a retraction of 8-10% and that Huawei really shot up in a year.