Gmail allows you to schedule email sending. Google's native service feature can be used by the mobile phone, the Android and iPhone (iOS) app, and the desktop PC version. The news is useful for those interested in forwarding messages and avoid forgetting deadlines. In addition, the function does not require the use of third party extensions like Boomerang or Chrome apps.

Remember that Google announced in January 2019 a new design for the email application, the idea was also to include indicated features, previously available only in the computer version presented in April 2018. In the following tutorial, check out how to schedule the sending emails through Gmail on your computer or mobile phone. In the latter, the procedure was performed on an iPhone 8 with iOS 12, but the tips also apply to devices with the Google system.

Step 1. After writing your email, tap the button located in the upper right corner of the screen. Then go to "Schedule Shipment" and select the desired day and time. In addition to options pre-configured by the system, the user can set a specific date in "Choose date and time";

Step 2. Scheduled messages can be found in a specific folder. To access it, select the menu button in the upper left corner of the screen. Tap on "Scheduled";

Step 3. If you want to cancel sending the email, tap on the message and go to "Cancel sending".

Step 1. After entering your email, click on the arrow button next to "Send". Then choose "Schedule Submission";

Step 3. Scheduled messages can be found in the "Scheduled" folder in the left side column. If you want to cancel sending the email, click on the message and go to "Cancel sending". 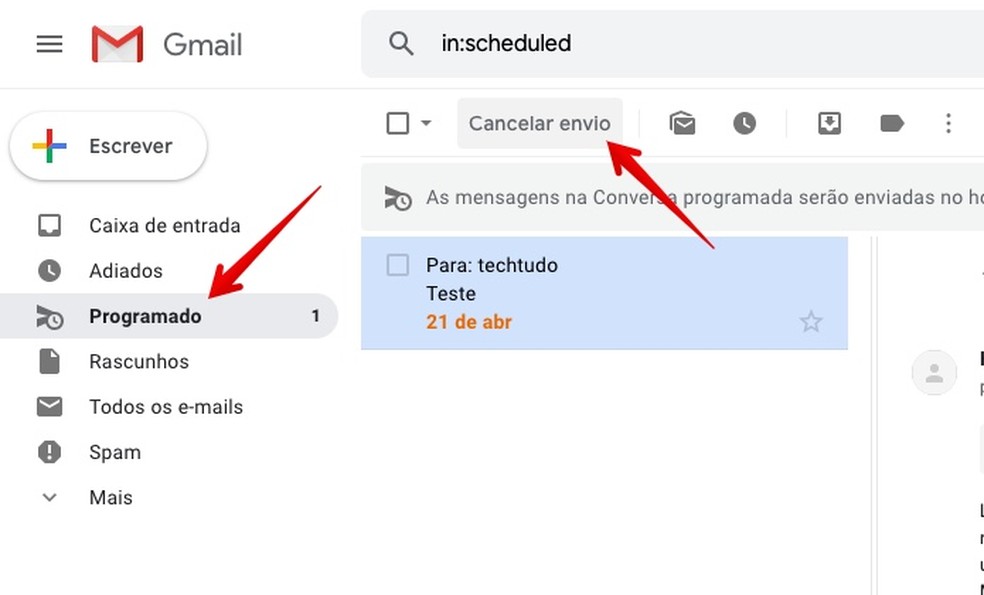 Ready. Take advantage of tips for scheduling email from Gmail without having to use third-party apps.

What is the best email tool? Give your opinion on the dnetc Forum.

Get to know the new Gmail's named functions