It is not today that Google has made our lives easier and easier. And I say this in the broadest sense of facility. The company is always concerned with offering its users products and services that facilitate everyone’s daily lives. Among them, one of the most used by my friends is, without a doubt, Google Maps.

In it, in addition to people being able to locate a certain point in the city, they can trace routes, check the distance and time spent (on foot, by car or public transport) between two or more points and, of course, locate a bus stop or metro station closer to the intended destination. But, if GMapas was already cool, it was even more so. Today, Google added a new layer to its map service that will now display, in the browser itself, the weather forecast for the main Brazilian cities. 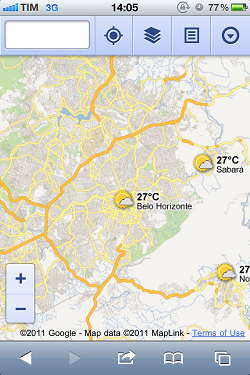 When accessing Google Maps at http://maps.google.com/maps?lci=weather, or simply activating the layer Climate in the right side menu by hovering over Satellite, the user will now have the forecast for the next four days or, if they prefer, see the forecast for each hour and / or for the next 10 days. In the left side menu of the service, the user can choose to display the temperature in Fahrenheit or Celsius, in addition to choosing to view the speed of viewing in Mislands or Quilometers per hour.

Obviously, the novelty is not restricted to the web version of Google Maps. Smartphone users will also be able to count on the mobile version of the service with the weather forecast for their city. Just touch the screen on the desired city and the forecast will be immediately displayed.

FirstTech: World’s first Apple reseller is closing its doors after 37 years of history

Google Map Maker will be disabled on March 31

How to Embed Files in Excel Spreadsheets | Productivity