The new iPad 2 not only differs from the competition by its hardware characteristics, but also by its software, a point that has always been strong on iOS devices.

One of yesterday’s great news was, without a doubt, the presentation of the new application GarageBand for iPad, a music utility that promises to turn the tablet into an inseparable friend of any musician, be it professional or amateur.

It maximizes to the maximum a trend that already existed in the App Store: the success of musical applications on the iPad. With its own solution, Apple shows that it is possible to go much further in the development of utilities of this kind, using several of the tablet’s own resources to increase user integration with the application. It thus allows the content to be so easily accessible that even those who do not know how to play any musical instrument can create new songs. 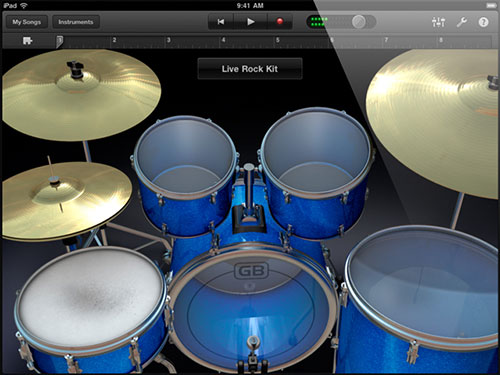 Anyone can make music with GarageBand. Of course, this does not mean that the result is professional, but it nevertheless helps in the growth of musical knowledge. With the app, you can play the piano (or various types of keyboard), drums, bass, guitar and guitar, all with multitouch on the screen.

And interactivity is intense: thanks to the sensitivity of the internal accelerometer, it is possible to remove the most varied sounds just by changing the force with which the virtual instrument is played. On a piano key, for example, the sound is different according to the weight of the touch, similar to the real instrument.

A function called Smart it allows the almost automatic creation of music for those who are completely unaware of the instruments, facilitating the creation of amateur compositions.

In addition to the built-in synthesizers, more professional musicians will be able to attach their own real instruments to record excerpts, which can be edited on different tracks directly on the iPad. A true walking recording studio.

See part of yesterday’s presentation, where GarageBand is shown (13 min, in English). The result is incredible.

The new GarageBand will be available for sale on the App Store starting March 11 for $ 4.99. It remains unclear whether it will be compatible with the first iPad, but it appears that the app requires processing power that the previous tablet may not have.