With a 20-inch LCD screen, the equipment is compatible with the standard that updates Blu-ray technology to three dimensions and also allows users to take advantage of online content recorded in 3D, from YouTube, for example.

With regard to the conversion of formats from two to three dimensions, the equipment supports functionality for DVDs and in several PC games, in real time, according to information provided by a press release. 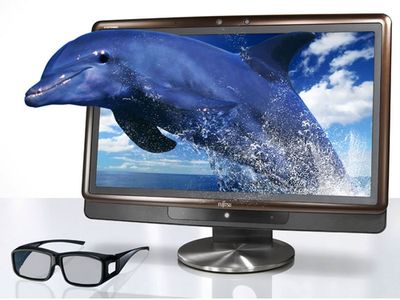 Recording in three dimensions, on the other hand, is possible thanks to the two cameras installed on the PC, which ensure the possibility of recording videos and capturing photographs in the format.

The machine also comes pre-loaded with various 3D content and some games, according to the same source. It is sold with two pairs of glasses, which combined with a screen filter guarantee images in three dimensions.

The new PC (FH550 / 3AM) is on sale in Japan from 17 June for a price corresponding to approximately 1,800 euros. Dates for other markets have not yet been revealed.

Fujitsu announced this week that it changed the designations of its PC lines. The Lifebook brand now designates the entire range of notebooks and the Esprimo brand the entire line of desktop computers. The decision is explained as a way to simplify the offer and facilitate the dissemination of Japanese brand products.