The Brazilian consumer market has immense potential and many foreign companies have already realized this. A good example has already been shown here, of the game that was placed in the category Entertainment especially for us Brazilians. But just as it attracts serious companies, it also piques the interest of “not so reliable” developers…

This is the case with the application iRadar Brazil, which prints a large map of Brazil with our flag, which at first makes us think that it is a program made by Brazilians. The purpose of the utility is, as the name suggests, to identify the various speed cameras scattered on the country’s roads. There is only one problem: according to its consumers, it does not deliver what it promises. 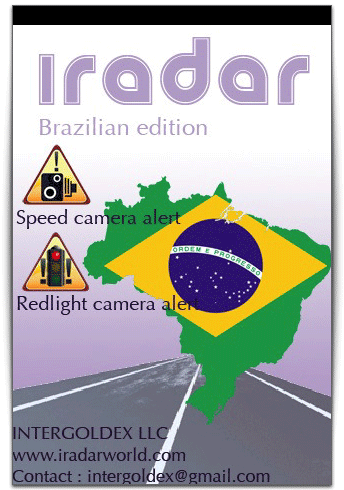 In addition to the very poor and poorly maintained graphical interface, its database also needs to improve a lot, because in large cities like São Paulo, Rio de Janeiro and Salvador it does not adequately indicate the location of the radars. It is all in English and the description on the application page on the Brazilian App Store is in very poorly translated Portuguese. A lack of respect for our consumer. 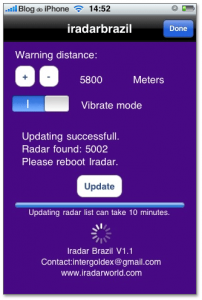 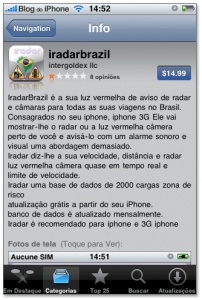 Rated with only a star, the reviews of those who bought it are not encouraging. Most even ask for their money back, claiming that the app cannot even identify 90% of sparrows. In addition to the risk of getting a good ticket if you trust the tool too much, it is still paid, costing nothing more, nothing less than $ 14.99, which is equivalent to more than 35 reais.

The company is not national (apparently French), having launched the same application in other countries, such as Australia, Canada and South Africa.

So be careful when buying apps, always reading the opinion of those who have already bought. There is a much more efficient similar, with a growing community that, above all, is free: Trapster.