Applications for Android and iPhone (iOS) can offer very useful functions even if they are not so well known. According to the monitoring tool Statist, the Google Play Store has accumulated, by September 2019, over 2.4 million downloadable apps, while the App Store offers 1.8 million downloadable software.

In the following list, we've put together five free mobile programs that are nicely designed, work well and bring beneficial features, but are not very popular with users of Google and Apple systems.

Malicious apps may slow iPhone; know how to protect yourself

Instant Transcription is a Google app that transcribes audio in real time while your smartphone is recording. The app is developed by Google Research Lab and works as a kind of trial version of Google Recorder, a recorder that debuted on Pixel 4 and works similarly. It can help students who need to take classes without taking their attention away from the explanation, or journalists who want to save time in decouping interviews.

When you open the app, it starts recording immediately and transcribes the audio on the screen. Text can be stored for up to three days and it is possible to configure several listening languages. With regard to the Google mobile app, audio storage along with transcription is missing. For iPhone, there is Transcribe – Speech to Text.

Plant sleepers can throw their Shake-it smart alarm clock to wake up on time. The app for Android and iPhone works in a curious way: by starting to ring at the scheduled time, it is only for the user, for example, to shake the phone many times or to shout at the phone for a certain period. You can also set up a surprise action, which means that you have to read the commands and think about what to do before you act. The promise that with these tricks the user will be forced to wake up to silence the alarm.

Transcriber and Audio to Text for WhatsApp

Transcriber for WhatsApp, for Android, and Audio to Text for WhatsApp, for iPhone, are time-saving applications for those who often get voice messages on WhatsApp. Both listen to the audio in silence and turn the content into text that can be read within seconds. The function avoids listening to too long audio at untimely moments and allows you to write down important information that is spoken. In addition, transcription is one of the ways to bypass the blue check in audio.

In both systems, simply set the language and share a received audio with the application to see the transcript on the screen. On Android, just select "Transcribe" on the upload screen. On iOS, I need to make sure the "Audio to text" option appears in the sharing menu before sending.

PicsArt Animator is an animation editor with advanced mobile functions. Available for Android and iPhone (iOS), the app has simple commands to adjust the movement of characters in the setting and add effects to elements. You can also edit in timeline mode with multiple track support, all compatible with frame-by-frame animations and voice editing, drawing and recording tools through the phone's microphone.

At the end of the issue, the user has the option to save to various video formats and GIF to send via WhatsApp. The app has many functions for a free app, although it inserts a watermark in the animation once the content is exported.

New Habit is an Android app that aims to help the user develop a new habit, whether it's exercising more, studying more, drinking more water, or waking up earlier. The app allows you to set daily goals and a final goal and, day by day, keep up with the progress as small tasks are completed. By creating a walking routine, for example, you can set up a simple form that asks whether or not the goal of the day has been met. There are also several suggestions ready to choose.

There are many different habit tracking apps, but New Habit stands out on the Google Play Store for being easy to use on a daily basis and therefore harder to drop out. The idea is that, after an initial setup, one has to just push a button whenever they want to register an achievement. A good option for iPhone is Habit Daily Tracker, which has a similar proposal. 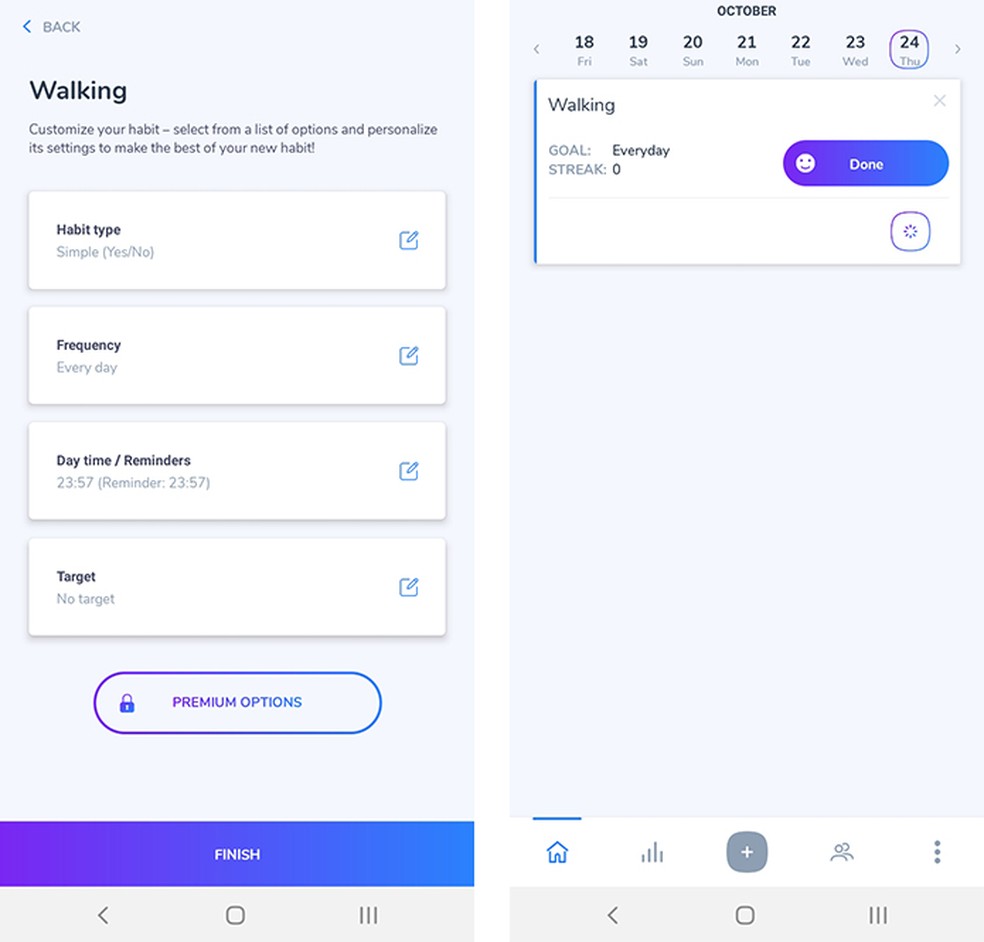 PicsArt: Learn all about the editing app