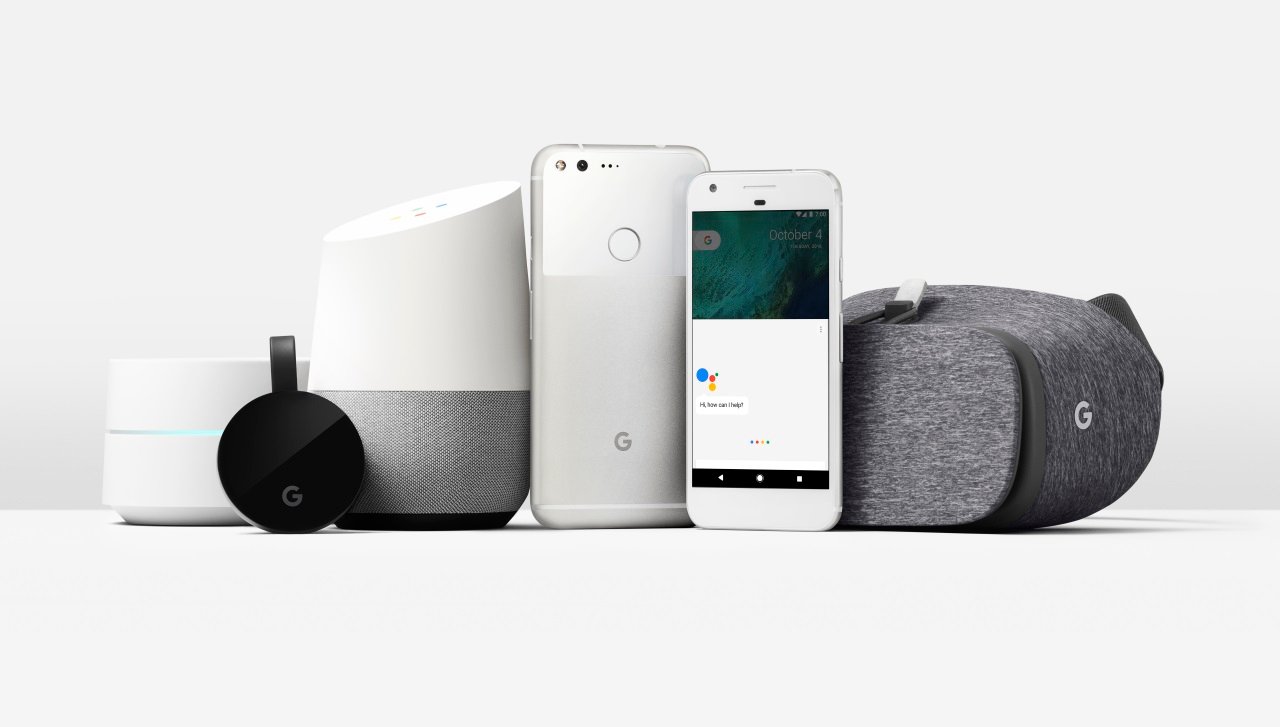 Sundar Pichai came on stage talking about Artificial Intelligence and how Google has been investing in «machine learning». Among these are the image recognition, voice, graphics and translation algorithms. Each of these services is very close to human understanding and each of them is present in Google Assistant.

The great example cited by Pichai was the new application Allo, which uses artificial intelligence in its essence. All services and products launched today have support for Google Assistant, check out a little more about them below.

Confirming the previous rumors, Google has just announced the new Pixel and Pixel XL, what we can clearly call «Google’s smartphones». The difference between the devices is basically in the size (and resolution) of the screen and in the capacity of the battery. While the Pixel has a 5-inch Full HD diplay and a 2.770mAH battery, the Pixel XL offers a 5.5-inch QHD screen and a 3.450mAH battery.

The devices are packaged by the Snapdragon 821 processor and come with 4GB of RAM. And it was not this time that we saw Google offer support for MicroSD card. In addition, we have the Pixel Launcher as a highlight and, of course, this is the first smartphone to bring the Google Assistant on board.

According to what was announced during the event, the new Pixel have one of the best cameras on the market. The team DXOMark confirmed this with one of the greatest results that channel experts have ever offered to a smartphone camera: 89 points. It is worth remembering that the HTC 10, which reached a score of 88, and which serves as the basis for the creation of the new Pixel.

Below are the technical specifications of the new Google Pixel:

The devices first reach the market in the USA, England and Germany. In the US, Google has partnered with Verizon and the devices will be available starting at $ 649. Then, our team will bring the Pixel and Pixel XL hands-on. Stay tuned.

Daydream was presented as a company platform for creating high quality virtual reality applications during Google I / O. Now, the company does the impossible and launches glasses for virtual reality.

The device will be launched in different colors and was thought to be comfortable and better adaptable to the users’ faces. Looking at the device, we see the upgrade that Google actually gave this device over the Google Cardboard. Daydream is tied with apps part of the Android ecosystem, but it will have some exclusive services, which can be used in conjunction with motion control.

The Daydream VR will be available starting in November for $ 79.

The device went somewhat unnoticed by the general public, but the fact is that Google has just announced a router in partnership with TP-Link, Google Wi-Fi. This router has the advantage of being easy to configure, the intelligent functions and the ability to create a large wireless network when connecting with other branded routers.

Google Wi-Fi will be available for pre-order in November, starting at $ 129. The service also has an application to control your connection.

In addition, the product design also stands out, with the router’s layout integrating more into home environments and even functioning as a decoration piece.

Today, Google announced the third generation of Chromecast, Chromecast Ultra. With it, it will be possible to watch videos in 4K director from YouTube or Netflix. The operation is basically similar to that of the previous models and the device will be available in November, starting at 69 dollars in the USA and will be in stores in 16 other countries.

Also featured at Google I / O, the team brought Google Home to the stage of today’s event. The device hits the market to compete, mainly, with Amazon Echo, another hardware that works as a personal voice assistant.

From a physical device connected to the home Wi-Fi network, you connect Google Home, which brings the Google Assistant on board as a personal assistant, and works from voice commands to perform various household tasks (trigger alarms, create lists shopping, playing music playlists, etc.), answering questions and accessing information on the internet (news, for example).

Google Home offers support for devices you own at home, such as televisions, chromecast, sound systems, temperature controllers and, remember, all by voice commands. You will not need to use your cell phone or even press any button.

Google Home will be available today for pre-order, for $ 129, or $ 50 less than its rival Amazon.

These were today’s announcements made by Google, which one were you most interested in?