Facebook has been preparing to put the team on the field in a market segment for which it has never before shown interest. According to an anonymous source on the Pocket-lint website, the social network is negotiating to acquire Opera Software, a company known for bringing both browsers of the same name to PCs and mobile devices.

According to information from the specialized website, the social network would be interested in competing directly with companies like Microsoft, Google, Mozilla, and Apple in browser development. Particular interest in Opera is due to Opera Mini and Opera Mobile, browsers available for mobile phones and smartphones that currently bring together nearly 170 million users. 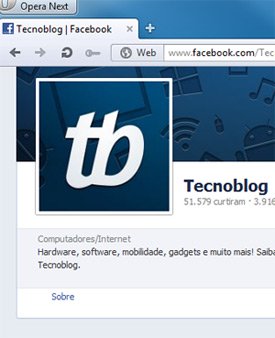 Among the most popular Opera Mini

Facebook has been found to be among the most accessed sites in Opera Software's mobile device browsers. In that sense, we seem to have a perfect marriage.

The ability of Facebook to make money from its extensive mobile presence, both through its special site for these devices and in applications for major platforms, is in doubt. In fact, this was one of Facebook's complaints from investors questioning the company's IPO last week. The poor prognosis for mobile device business would have been reported only to a select group of investors, complainants in the US justice case claim.

Among the most popular browsers, Google Chrome has emerged as the world's most widely used browser, according to controversial statistics from the StatCounter site. There are a number of questions about the methodology used by the company to determine that Chrome was the most used browser in April this year. Still, Internet Explorer ate dust.

A source from The Next Web confirms the information and adds that Opera Software is currently hiring new professionals for the sole purpose of growing more in the market. They consider either joining another company or going public on the stock market. If this scenario were confirmed, Mozilla would be the last major browser development company to remain independent.

Remember that there is already a Chrome browser based PC for native integration with a number of social networks, of which Facebook and Twitter stand out. Rockmelt costs nothing and works on both Windows and Mac. It also has an iPhone app.

Opera Software was consulted by Pocket-lint, but declined to talk about it. Standard behavior in this type of situation.