UPDATED – 18:22: We added the DJI video featuring the new products, plus videos from one of the best pilots in the world when it comes to FPV drones, are at the end of the publication.

THE DJI officially announced the DJI Digital First Person Viewing Transmission Systemyour new FPV ecosystem. The company gave "name to the oxen" or, in this case, the certifications that appeared at the FCC last week and presented the new DJI FPV Goggles, The DJI FPV Remote Controller, the transmission module DJI FPV Air Unit and yet one DJI FPV Camera.

With the popularity of drone racing growing, FPV competitors are looking for the next technology to keep up with their demands. (…) As the only digital video streaming solution on the market that works at the same level as the analogue, even surpassing it in some respects, we hope to set a new standard for digital FPV. – Ferdinand Wolf, Creative Director of DJI Europe.

According to Haye Kesteloo of DroneDJ, the new ecosystem offers low latency 28 milliseconds and HD video for the user to have an experience "with much more detail, resolution and clarity of their surroundings" as well as making it "much easier to see where your FPV drone is in relation to any obstacles". It is available since today in two packages, which are:

According to Johnny FPV, one of the most famous high-speed drone riders in the world, this new DJI system is a set that will change the segment by bringing quality up to that found in other models.

Johnny FPV: This system is a game changer

Below you will find more details about each of the devices:

The first correct guess was to throw a smaller and lighter. DJI's new FPV Goggles offers low latency of only 28 milliseconds and filming in HD 720p at 120fps (frames per second). For competitors, racing images can reach up to 720p to 60fps with the help of a micro SD card

And good news is that anyone who wears glasses will not have a hard time wearing them.

The small photo is what you see when you fly with an analogue system. The big one of the DJI system. | Source: DroneDJ

The Air Unit connects directly to FPV Camera, as well as having a slot to insert the micro SD card. Both the DJI HDL FPV system and it are equipped with eight 5.8GHz frequency channels, which allows at eight drones fly at the same time in a single system.

On top of all this, he still has a "Focus Mode" which reduces the signal bit rate to the center of the frame, neutralizing interference for the user to see clear images even in challenging environments.

The FPV Remote Controller is not unlike other DJI controllers on the outside, but according to DJI Europe's creative director, what innovates inside. It also uses a 5.8GHz frequency channel to communicate with the Air Unit and 4-in-1 closed loop software, allowing users to set parameters for the other three components remotely. Your transmission range arrives at 2.5 miles, about 4 km. 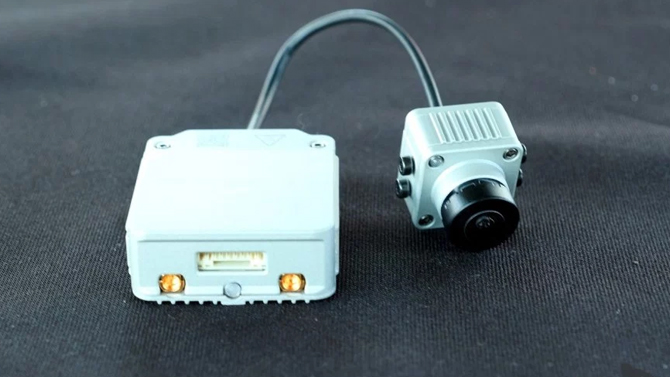 The question that came up when DJI will announce its own FPV drone to complete the package. As we found that the "Air Unit" is not a drone, the solution is to wait and see what DJI has in its future plans, as its current drones despite compatibility with some of the technologies are not responsive like racing FPV drones.

For those who don't know FPV drones, below some videos from Johnny FPV, one of the best pilots in the world: