Dell starts selling its new tablet over the next month, in the European market, leaving the USA for a second phase, reports the international press.

The Streak (also known as Mini 5), which had been anticipated during CES 2010, is described as a device halfway between a smartphone with a very large screen and an iPad. It has a five-inch (12.5 cm) touchscreen, uses Google’s mobile operating system, Android, and is thin and small enough to fit in a pocket.

The version that starts to hit European stores in June features 3G, Wi-Fi and Bluetooth connectivity. It has GPS, 16 GB of memory, a Qualcomm Snapdragon processor (1GHz) and two cameras, one placed in the front and the other at the back of the equipment.

The connection to the Android Market is also guaranteed, for download applications, which is a differentiating factor compared to some tablets with Android OS. In addition to the applications developed for the Google operating system, others will also be provided, prepared by Dell.

This “is the first in a new family of devices” to leave the new division of the manufacturer, dedicated to equipment with small screens, Tavis Butler, of Dell, told the BBC.

The same media suggests, based on articles in the specialized press, that the company may be preparing to launch yet another tablet seven inches and another 10 inches.

One of the factors that can hinder the adoption of the mini tablet is the value that it is expected to be marketed. While no concrete data has yet been released on the price, Travis Butler admitted that it will have to identify it “as an object of desire and not as a need”.

There is still no specific indication about the availability of Streak in the Portuguese market. 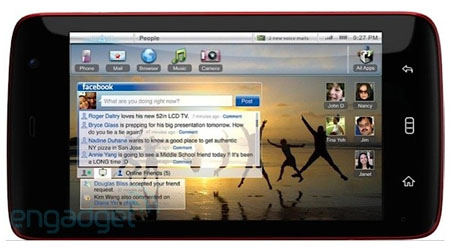