As we talked about here on Google Discovery, Google recently launched a URL shortener: goo.gl. But the use of the service was restricted to users of the Google Toolbar.

Since the Toolbar is not yet available for Google Chrome, an extension has been launched that does the same service.

After installation, click on the extension icon in the upper right corner. The shortened URL will be displayed and, right below it, the options Tweet and Copy. The first will tweet the URL and the second will copy it to the clipboard (the famous Ctrl + C).

In addition to the Twitter support previously mentioned, version 0.3, released on 12/20, added support for Facebook and sending by email, through the standard client or through Gmail. In addition, now, by having the URL shortened, the extension automatically copies the result of the process to the clipboard. 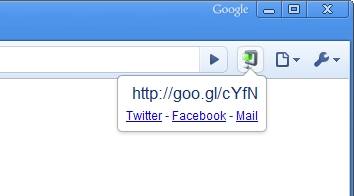