Bike apps are interesting for many types of users, from those who ride around cities on a daily basis to those looking to analyze their riding performance. This is the case with Bikemap, which allows you to find sections made by other users, and Usebike, which informs the rider about nearby bicycle and bike paths, according to their location.

There are even apps to choose the right location for mountain biking and more difficult trails such as Runtastic Mountain Bike. Here are ten apps available for Android and / or iPhone (iOS) phones that can help you ride a bike.

Available for both Android and iPhone (iOS), Bikemap is an app that allows you to find routes taken by other cyclists, allowing the user to share their own paths. The app offers several routes available, from the shortest to the longest. All paths are monitored from a GPS, increasing the safety and confidence of the rider in the stretches traveled. The downside of the software is that there is no english version.

Runtastic Road Bike is an application that allows you to analyze the performance of your race with numerous features. These include real-time tracking of your location, weather data of the location you are traveling, heartbeat, speed and even automatic pause for short breaks. Available for both Android and iPhone (iOS), the software is very complete and can be used by any type of cyclist, whether amateur or professional.

Map My Ride also fully tracks your bike performance. The app works as a kind of personal trainer, monitoring the distance traveled, average speed and calories burned. The software is also available for Android and iPhone (iOS) and lets you share your race with other users; even on other social networks like Facebook.

Runstastic Mountain Bike is a specific app for cyclists who enjoy hiking in mountainous landscapes. Through GPS, the app can monitor training progress, indexing speed and distance and compare your performance with other users, as well as provide numerous mountain bike route surveys. The program also has live tracking that makes it possible to track the tracks in real time. The software is only available for iPhone (iOS).

Strava, unlike all the above, is an application that monitors not only pedaling, but also running, walking, crossfit and other types of physical activities. It is an essential tool for those who wish to have a physical exercise routine and are looking for a gradual improvement. It is also worth noting that the app has a ranking by segment, that is, it is possible to check its rating on popular sections of road or trails. The software is available for Android and iPhone (iOS).

Endomondo is a fitness and personal training app that records workouts through GPS itself. The app allows you to reach training goals by being motivated by the app's audio coach. With Endomondo you can record races, bikes and more than 60 other sports, monitoring the time, distance and speed of all activities. In addition, the app enables synchronization with other devices such as Apple Watch and Samsung Gear, for example. 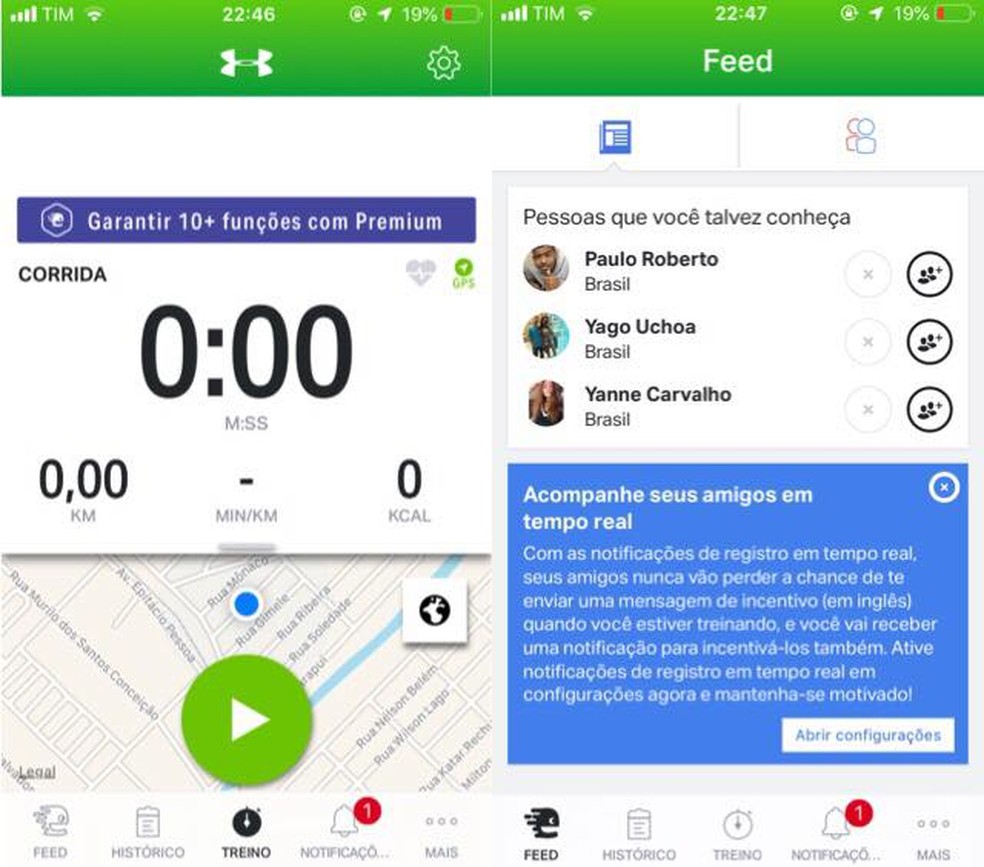 Sports Tracker, available for Android and iPhone (iOS), is also intended to track physical activity to analyze your performance. The app's differential is that it not only allows you to share your routes or speed with your friends, but there is also the possibility to comment on the app itself about the trainings and posted photos of other users. Therefore, besides helping to keep up with your exercises, the software acts as a kind of social network.

Cyclemeter is an app that is available for both Android and iPhone (iOS). In addition to collecting displacement data, calculating average and setting routes, the app has high quality information provided by the headset through voice. It is possible, for example, to stop and continue messages by the handset itself, without having to pick up the phone at race time.

App allows voice messages to be stopped by the phone itself Photo: Playback / Julia Marques

Garmin Connect is an application that has many functions, monitoring both your health data and your performance, whether running, walking or cycling. The app allows you to create new courses, exercises and even challenge your friends to competitions. A plus point of this software is the possibility of reviewing their paths and breaking new personal records, encouraging the user to improve.

UseBike is a Brazilian application created just for urban cyclists. The app gives you plenty of possibilities to use, with information on all bike rental points, repair shop, parking lots when you want it and, most importantly, information about nearby bike lanes and lanes so you always travel the safest way .