Emoji are typical Japanese emoticons, which were one of the great new features of firmware 2.2. But as it is a requirement of the Japanese market, they are only officially released to customers of Softbank. Some solutions jailbreak and even gambiarras appeared, but always presenting some side problems, like filling your contacts with useless information.

Now anyone can enable emojis on their iPhone or iPod touch thanks to EmotiFun, a free application from App Store.

To activate them is very easy:

– install the application (link) – open and close it on the iPhone or iPod touch– go to Settings > General > Keyboard– select International Keyboards > Japanese and then activate the emojis – done! 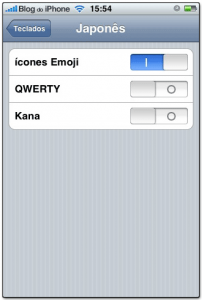 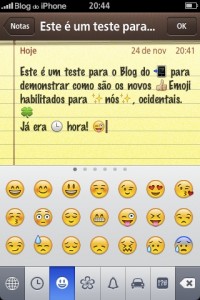 From there you can already include the drawings in any text field, be it email, notes, SMS and even contacts. Remember that they can only be seen on other iPhones with firmware from 2.2 onwards that also have emojis enabled. So spread the word as much as possible for everyone to activate! ?

UPDATE: the program has been removed from the App Store. see more on here.