Because of Earth Day (April 22, next Sunday), Apple saved for this week all the news related to the environment. Earlier today, she announced the new rob Daisy for dismantling iPhones and renamed her program trade-in to GiveBack in addition to also inform that it will make more donations to Conservation International.

But the news didn?t end, no. She also published today her newest Environmental Responsibility Report (PDF), which speaks of the company’s progress in the business covering fiscal year 2017, as well as updated the page on its website dedicated to the subject. Below, you can see some highlights.

If we compare 2017 with 2011, the reduction in emissions was 54% worldwide; as of this year, 66% of the renewable energy purchased by Apple comes from your own projects.

Another effort of the company that deserves to be commented on was the improvement in energy efficiency of Ma’s facilities worldwide, including more than 500 retail stores. Improvements have been made to the lighting (now LED), heating, ventilation and air conditioning systems, resulting in a total electricity savings of 3.7 million kilowatt hours per year.

Apple’s global energy footprint was reduced by 14.7 million kilowatt hours and 225,000thm in fiscal year 2017. Combined with other efficiency measures implemented since 2011, Apple saved 70 million kilowatt hours of electricity and 2, 4 million natural gas per year. The company also worked directly with its suppliers to audit facilities and find opportunities for better energy efficiency, failing to send 320,000 metric tons of CO2e to the atmosphere in 2017. 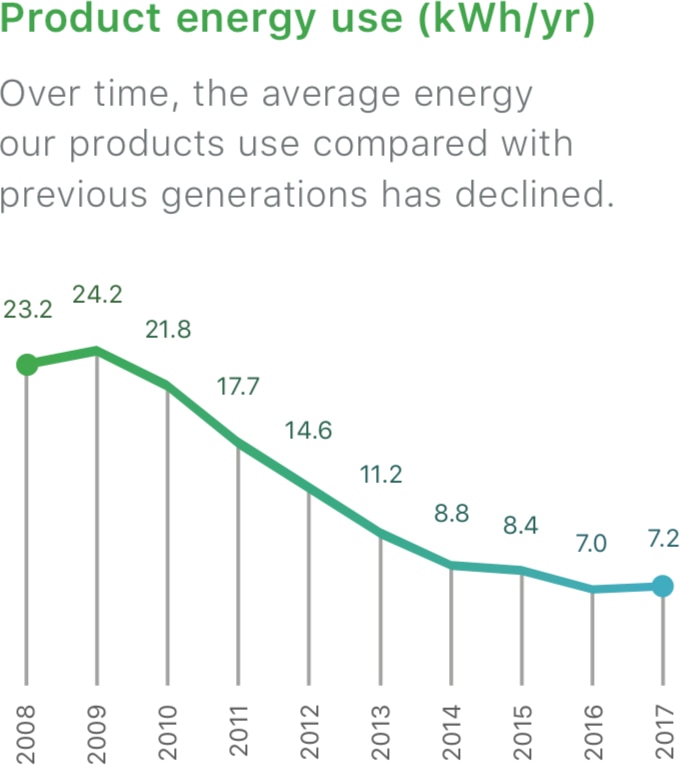 To get an idea of ??the energy advances in Apple products, the MacBook Pro with Touch Bar consumes 61% less energy than the original MacBook Pro with Retina display, the iMac consumes up to 96% less energy in idle mode than the first generation of the computer , the iMac Pro consumes 40% less energy during idle (the result of an innovation in the design of the power supply) and the HomePod consumes only 9 watts when playing music (less than the average of an LED lamp).

Greenpeace was not so happy

One of the points highlighted by Apple, as we talked about above, was the new rob Daisy. But not everyone is happy with the initiative.

In that the robot is something bad for the environment and, consequently, for the world. But Greenpeace said that Apple should invest its efforts in creating products that can receive upgrades / repairs (meaning that they have a longer life) than simply focusing on recycling.

Instead of another recycling robot, what Apple needs most is an indication that the company is embracing one of the biggest opportunities to reduce its environmental impact: designing repairable and upgradable products. This would keep your devices in use for much longer, delaying the day when they would need to be dismantled by Daisy.

Customers want to keep their devices longer, as evidenced by a 3-4 week wait for a battery replacement in Apple stores earlier this year, when it was forced to dramatically reduce the cost of replacement.

It was no wonder that Apple received bad grades in the Greenpeace campaign that evaluated the repairability of Ma’s products even though, interestingly, the iPhone was the Apple device with the best performance.

Of course, Greenpeace is not crazy to say that Apple’s initiative as a whole bad. Because, just compare it with those of other companies. Samsung, for example, today has only believe 1% of its operation being powered by renewable energy, as pointed out by the organization.