A few days ago I became aware of a new national project, it is still in its early stages and needs support to continue, both from people and financial support, so nothing fairer than presenting it to you, so if If you are interested, you will be able to assist in the development of the Anthares Linux distro.

I asked the project's creator, Bruno Santos, to explain to us what the differentials, purposes and goals for the Anthares project, check out:

The Anthares distribution was developed from scratch, based on the book Linux from scratch (LFS) 8.2, all packages being compiled one by one from the base to the graphical interface.

The Anthares Operating System aims to have only the essentials for its operation, that is, any other program to be added to the system as the need or will of the user. During installation, the system will be installed with a generic base that supports the main hardware in the market. Once installed, the user will have an option to remove support for such hardware that the machine does not have to make the system as suitable as possible, this support will be removed by uninstalling their drivers and removing the kernel modules.

The goal of the project is to make an operating system that is tailored to the user's needs and specially tailored to his machine, so that the maximum performance of the computer is extracted, and the maximum space of both HDD and RAM is taken advantage of.

It is not always a good idea to have a set of tools already installed on the system, so the Anthares system will be accompanied by software called "Start Point" from which, after installing the OS on the computer, the user chooses the main programs he wants. install on your system. An example is that the user can choose whether programs such as Gimp, Inkscape, Firefox, among others, will be installed on the system or not (this process is still considered an OS installation step). Once all desired programs are installed by the "Start Point" and the application is closed, the surpluses will be automatically removed from the Anthares system. The Start Point program is already included in the system prototype. 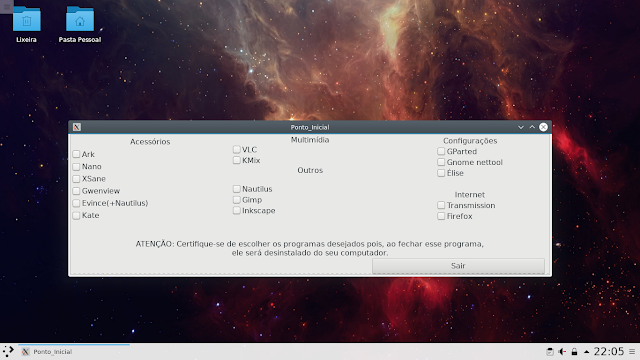 There is also a website where the user can create an account and from there, build a custom system ISO, choosing which programs he wants the Anthares system to have, and can even adjust the appearance of the system. In this account the user will also have a cloud to store, programs, folders, scripts, etc. Users can choose to have files in the cloud available only to them, share files with others, or even charge when someone else downloads a shared program or file. This cloud also has the store function, where developers make programs and market them to others. To use the store, the Anthares system has a program similar to Google Play, where a normal user enters the name of the shared program he wants, finds it, clicks "install" and the system will download and install the software.

The Anthares system will contain a voice-assisted virtual assistant called lysis, which is already installed on the system, it is important to understand that lysis is not an artificial intelligence but a virtual assistant. Open programs and interact with the operating system as directed by the user. An example is that she checks the state of the computer, will kill processes or close programs if the user orders, she is not just limited to that, it is intended that the lysis also has the function of controlling the computer by voice, passing slides during a presentation for example. A prototype lysis has already been developed and is included in the Anthares system. 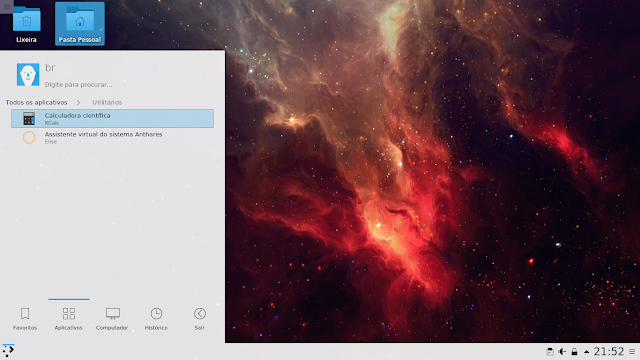 Currently the project is in its early stages, where it is undergoing rigid testing and corrections for better performance. Currently the initial prototype is only accessible to the project developers, in this prototype the necessary tests and configurations are being done to obtain greater stability and performance, the best configurations will be added in the final system later.

The prototype contains two programs that are part of the Anthares project, they are the "Starting Point" and the "lysis" already mentioned above, for now, these programs were developed with the basic functions only, but updates are being implemented to be more complete. .

The UnicodeTec group (Name given to the group of developers working on the project) invites developers who want to participate in the project by contributing to the development of the project system and / or programs from which they can become both a face-to-face developer, in the city of Marlia – SP, as a web developer. There will be an account on the site where you will have access to development information and a list of work to be done on the system, such as functions or processes that still need to be implemented. For each list item the developer can choose whether to go to work or not, and for each work on the list there is a recorded amount that will be paid to the developer who successfully completes the work. All other forms of work and payment will be recorded in the developer's account.

For those who don't want to be a developer but want to see the project completed, be able to support the project with donations, their support will make the project progress faster and make us have a foundation to keep our work environment active, to make their donation. visit the link: sistemaanthares/apoie The contributions will be well used, you can follow in which part of the project it is being invested. To follow up, check at the bottom of the website where we talk about our project. sistemaanthares/anthares

Some comments about the Anthares project

Our role of Diolinux is always to encourage new projects, our function is not to curb the enthusiasm of those who are trying to create new and good things, so we wish all the luck in the world in the project.

Not all of the proposals that the distro has are completely original, such as creating a system from the site, SUSE has done this for many years, Portheus also, however, there are some interesting features:

– A voice assistant is something a lot of people would like to have on Linux desktops, disregarding Google Assistent.

– Removing unnecessary components can actually wipe the system, similar to what you would do in a compiled distro for your hardware, which is not exactly the case, but resembles;

– Creating a sustainable model where developers can make money producing and sharing software, which eventually reminded me of the elementary OS AppCenter, etc.

Some challenges, however, await the distro, so she needs your help if she has enjoyed the initiative. Several elements described are really not new, but that doesn't mean they are less interesting, the "starting point", a perhaps more graphic way to use a feature that exists in Ubuntu Minimal, Debian Net Install and even Arch Linux. where you just install what you want.

Being made from LFS is also an interesting differentiator, but that implies that all software needs to be packaged for the distro, a monstrous job that can literally take years, let's look at Solus Project's Solus distro, which also has It is a similar premise and still suffers from the lack of some programs in its repository.

Of course, it won't be easy, so why not do something, tell us what you think of the Anthares proposal below, what do you think we bring the developers to a DioCast to get to know the distro even more?