We know that every now and then there is an iPhone or other smartphone case that simply catches fire because of a battery problem. Not only are problems so recurring in Ma's case, but they're not as rare as the company would like.

This time, however, something happened: the device that would have caught fire was Apple's wireless headphones, the famous Airpods! 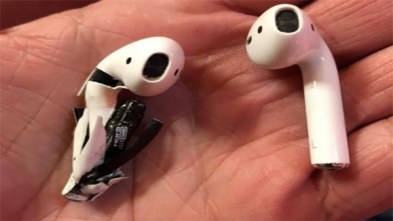 Jason Colon, a resident of Flrida (United States), told NBC who was at the gym normally doing workouts when his AirPods started to crash and he noticed a white smoke coming out of one of them.

Colon then left the pair of headphones on a piece of equipment and went to get help. When he returned, the phone was as it appears in the picture, totally destroyed. That is, he did not actually see the device "explode," but clearly there were flames quite possibly, something battery related.

From the report, you can see that Colon user of Apple products, since it has an Apple Watch too; Then I notice the surprise and fear that the device might explode while it was in your ears, which could cause you serious problems like that case of the woman whose Beats headphones exploded in her face.

As this was the first and hopefully the last case, the news came very quickly Apple, who has claimed to be investigating the problem and that they contact Colon to talk about it.