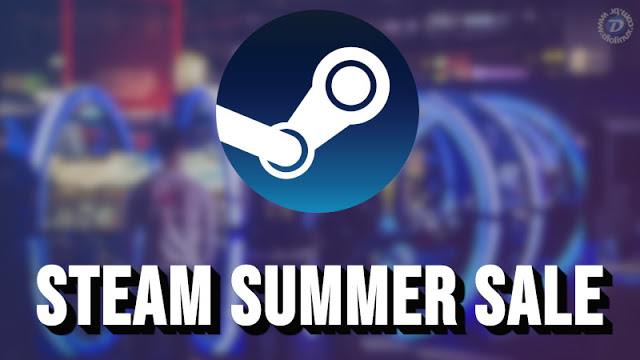 As usual, the Valve (out of the blue Steam) has several Sales (Saldões) throughout the year, one of which is Steam Summer Sale (Summer Sale), where we can find games like GTA V, PUBG, Assassin’s Creed Odyssey, Devil May Cry 5, Resident Evil 2, Far Cry 5 and Final Fantasy XV for example, with prices containing discounts of up to 80%.

We, the team Diolinux, we put together a list of TOP 12 games that we found interesting and that could be in your Steam game library, obviously, all compatible with Linux, either via Proton or not .. First of all Dio’s indications, the games are:

The Witcher: Wild Hunt is an open-world fantasy RPG full of vital choices. In The Witcher, you play as a professional monster hunter, Geralt of Rivia, in search of the child of prophecy in a vast open world, rich in merchant cities, pirate islands, dangerous mountain passages and forgotten caves to be explored.

The PC version of Grand Theft Auto V and Grand Theft Auto Online features First Person Mode, which gives players the chance to explore the incredibly detailed world of Los Santos and Blaine County in a completely new way. When a street rascal, a retired bank robber and a terrifying psychopath get involved with some of the underworld’s scariest and craziest criminals, the U.S. government and the entertainment industry, they must perform bold blows to survive in this ruthless city where they don’t they can trust no one, not even each other.

In Sekiro: Shadows Die Twice, you are the “one-armed wolf”, a disfigured and disgraced warrior who was rescued from the abyss of death. Destined to protect a young lord descended from an ancient bloodline, you will become the target of many cruel enemies, including the dangerous Ashina clan. When the young lord is captured, nothing will stop you on a risky journey to regain your honor – not even death itself.

ProtonDB: Gold (but changing to Platinum)

Follow the dark tale of young Amicia and her little brother Hugo, on a journey through the darkest moments in history. Pursued by the soldiers of the Inquisition and surrounded by swarms of unstoppable rats, Amicia and Hugo will learn to trust each other. As they struggle to survive against overwhelming odds, they will struggle to make sense of this brutal and unforgiving world.

1 – Bloodstained: Ritual of the Night (game size may come out soon)

In Bloodstained: Ritual of the Night is the COMPLETE game experience, an exploration-focused side-scroller action RPG that contains all the best features you’ve known and loved in the Metroidvania genre in a single game full of content. Play as Miriam, an orphan marked by the curse of an alchemist who slowly crystallizes her body. To save herself and, in fact, all of humanity, she must fight for a demon-infested castle summoned by Gebel, her old friend whose body and mind have become more crystal than her flesh.

Owlboy is a narrative platform adventure game in which you can fly and explore a brand new world in the clouds! Pick up your friends and bring it with you as you explore the open skies. Overcome obstacles and bigger enemies in one of the most detailed adventures of that era.

Deck composition comes to life in Hand of Fate.

Immerse yourself in a beautiful hand-painted world in search of your true identity. Like the mysterious warrior, Dust, his action-packed journey will take you from peaceful clearings to snowy mountains and beyond. At your disposal is the mythical Blade of Ahrah, capable of transforming its bearer into an unstoppable force of nature, and the diminutive guardian of the blade, Fidget. Fight dozens of enemies at once with a hard-to-learn and easy-to-learn combat system, tackle a variety of friendly villager missions, discover ancient secrets and powerful upgrades hidden throughout the open and uncovered world and discover the story of a ancient civilization on the brink of extinction as you struggle to discover your own past.

Now my list of games that I find interesting in this Sale, let’s go to it:

Immerse yourself in the experience of winning strategy. Microsoft Studios brings you three epic Age of Empires III games in a monumental collection for the first time. Command powerful European powers seeking to explore new lands in the New World; or jump east to Asia and determine the outcome of their power struggles.

2 – Ori and the Blind Forest

The Nibel forest is dying. After a major storm sets in motion a series of devastating events, Ori must travel in search of the courage to confront a dark enemy and save the forest of Nibel. “Ori and the Blind Forest” tells the story of a young orphan destined for heroism, in an incredible-looking Platform Action game created by Moon Studios. Featuring hand-painted arts, meticulously animated characters, a fully orchestral soundtrack and dozens of new features in the Definitive Edition, “Ori and the Blind Forest” explores a deeply emotional story about love and sacrifice and the hope that exists in all of us.

Set in a brutally unforgiving post-apocalyptic world, 7 Days to Die is an open world game that is a unique combination of first-person shooter, survival horror, tower defense and RPG. It features combat, creation, looting, mining, exploration and character growth in a way that has received a sweeping response from fans around the world. Play the ultimate zombie survival RPG that came first. Navezgane is waiting!

The year is 3025 and the galaxy is caught in a cycle of perpetual war, fought by noble houses with huge mechanized combat vehicles called BattleMechs. Take charge of your own mercenary team of ‘Mechs and the MechWarriors who pilot them, struggling to stay afloat while you find yourself involved in a brutal interstellar civil war. Upgrade your base of operations, negotiate mercenary contracts with feudal lords, repair and maintain your old and stable BattleMechs and execute devastating combat tactics to defeat your enemies on the battlefield.

And we closed this TOP 12 with games that will give you some good hours of fun.

When talking about games and Linux in the same sentence, we need to do a nice “rhetoric course” for certain comments here on the blog and on the channel. So much so that the comic strip of HQ NUUX people expressed it very well, enjoy and check out their work that is a show!

Jokes aside, what would be your TOP 12 list of this Steam Sale Summer, say it in the comments.

I wait for you next time, a big hug.