Boy, I never thought I was going to controversy, when I started this project here my only goal was to learn and share what I was learning. For a long time that's how it happened, and when I say learning, I mean technology as a whole, who knows Diolinux (the blog) since the beginning knows how much the subject was varied here, many Windows and Mac tutorials and After Linux, the name of the blog is a fluke, just see our motto that you will understand. 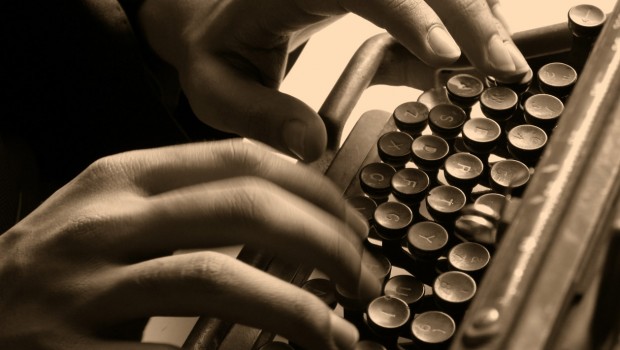 In fact the subject of this post is the partnership between Canonical and Microsoft, but let contextualize. This week we got the news that took everyone by surprise, an unusual partnership between the company that maintains Ubuntu and the company that maintains Windows. I made a post to tell the news that now Bash (from the GNU project, has been charging me to say that the Bash was from GNU, so the GNU Bash, just so you know) along with all the "user space" of course, Bash was obviously included in the fact that Ubuntu uses it, it can now be integrated with Windows 10 like any other application, so developers using Windows 10 to create applications can use some of the features of Linux without having to use virtualizations or anything, that is, they already worked with Windows, the difference that has now become easier.

OK, until all right, but then so many macabre theories began to emerge that would make H.P. Lovecraft hide in fear. I decided to make a video answering these comments, because a lot of people were thinking that the apocalypse was coming with right to the four horsemen and everything is about this video and its repercussion that I want to comment.

My videos on YouTube do not usually have many dislikes, always have one or the other but nothing much, but this one had more than usual, at the moment only 20, but even so, more than usual, curiously was a video with more likes than It's normal too, over 1000 so far, but what led me to write this was not the approvals and disapprovals, but some comments …

What led me to make this video was my participation in social networks. I think unlike other blogs, I have a very high activity in the user communities, talk to a lot of people and as far as possible, I have read the comments. I've seen a lot of personal blog posts, I've seen a lot of "Din Me" attempts to predict the future, but what really drove me to make the video were things like this: 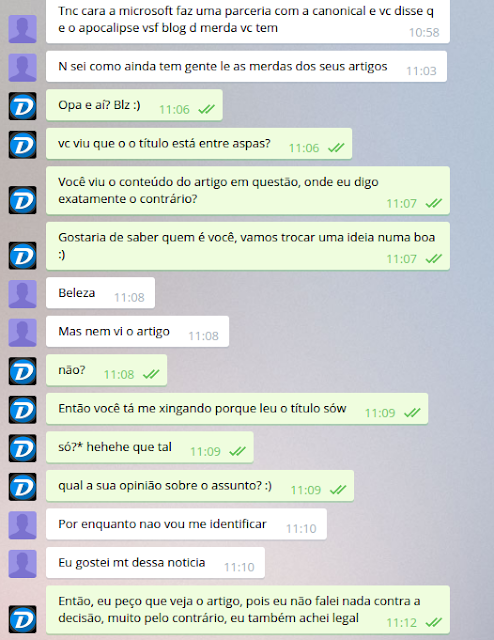 Just to name a few, as you who have seen the video know, have had many more. I don't want to speak in a reproachful tone or anything, but the best article I saw on the subject was my friend Aprgio Simes, just click here and read (Really read!)

If you have tried to explain something to someone and it has been misunderstood you should know how frustrating it is, I as a teacher feel even worse in this case, seeing that many people could not understand how simple this maneuver was (read Aprgio's article) .

I want to apologize for any exaggerated exaltation in that video where I comment on people's comments, and I want to highlight a specific part in which I think needs explanation, as one person commented to me in a very polite manner I decided to do the same .

I want to thank Clayton for the comment, he was not the only one to comment on the term "Rwindows", there were a couple of other comments or so on the subject, and I found it pertinent and responded by putting my position on it. 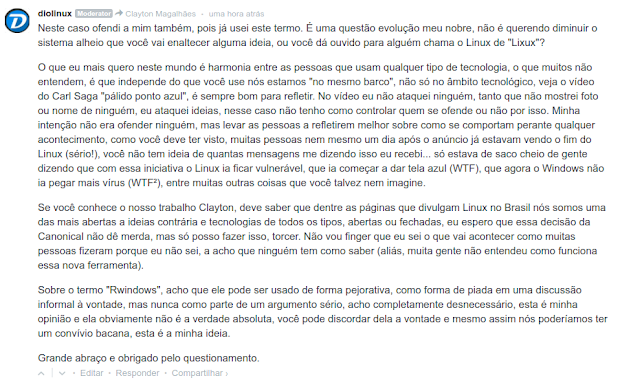 Are comments like these that make us stop and reflect on? Diolinux will be completing 5 years of existence this month. The urges to stop publishing were many over time, but we were always taking, adapting and working, after a while Diolinux in addition to a tutorial blog, also became a source of news and information and later opinions.

As much as everyone knows this (or should at least know), the secret to being criticized for something just doing something, to get your own hater club just give your opinion on something on the internet, there's no how to control this kind of thing. If you say you don't like Onion the onion club will come down on you, if it doesn't exist the guys just make up for a purpose in life. These are things that anyone who exposes themselves has to know how to handle, and I think that I get along very well. I only really worry, a sincere concern, when I try to get a message that means "X" and the crowd understands "Y", or as it was in this case of Canonical and Microsoft, just about every other letter of the alphabet.

First of all, my intent has never been to offend anyone, anyone who has close contact with me knows that the thing I despise most in the world is conflict of any kind, although I find debates productive, comes to a point that I don't feel comfortable with. in debating, simply for the feeling of being against each other, something innate in me.

I want to praise the importance of the people who develop the software we use every day, thanks to the efforts of people who translate, encode, package, and to those who also, why not? We have many quality things to use for free or at low cost. I always said that I started using Linux because it's good for me, not for hating Windows, which I obviously don't hate, by the way, I think there's nothing worth really being hated, this feeling is not good for anyone and It often prevents you from seeing a little beyond the "fog" created by this very hate.

As I explained responding to our dear reader, and in this I still have conviction. Avoid using the term "Rwindows" when discussing something serious, because as I gave you example, you would probably not hear someone criticizing Linux calling it "Lixux", at least not with the same attention as someone looking to make a statement. grounded criticism. Now, in the colloquial sense, for conversations, jokes, etc., friend, feel free, who am I to say what you should or shouldn't say? Incidentally, the very recommendation not to use the term "Rwindows" is just that, a recommendation, as I find something childish to do.

In this part I want to dedicate myself to making clear my point of view about "Ubuntu on Windows" and what it means, without wanting to predict the future, after all, I think nobody has a crystal ball. This goes especially to those who are confused about what this entails, both on Linux and on Windows.

Being very simplistic what happened was as follows. Canonical helped Microsoft create a "program" for Windows, this program allows a Windows-based developer to have access to Linux tools without using Cygwin, a virtual machine, or dualboot. Nothing else changes.

Many people talked about the old concept that Microsoft applied internally, Adopt, extend and extinguish, which is really worrying. But as I answered to some people where it was possible, we have to admit that we do not know what will happen, we may be worried, yes! But who else has to worry about Canonical itself, after all they won't want to sink themselves not? Some people say that this was the end of Linux, something that is meaningless, after all, Ubuntu is just one of the distributions, if it were to end, which is impossible after all no eternal system, but very unlikely, there are many other distributions. Linux to migrate to those who like the system.

With this change, who used Linux by obligation to develop and preferred Windows, now just gained a more comfortable option, who used Linux because they wanted, can still do the same, with all the features that only Linux can provide.

One of the freedoms that I think deserve more prominence in the set of 4 that make up Free Software is that "Use for any purpose", it should be clear that this freedom includes anyone using the software as they see fit, including MS. What do we have to charge them, if it happens, if they try to lock the code in some way. It's no use complaining that they will make money on the work of others, this is within SL standards, you can do the same if you want.

I'm not paid by Canonical to defend it, let alone paid by Microsoft to defend it (yes, I heard that). The only thing I can do is keep talking about the things I like around here and hope it doesn't give shit in the future and patience, this is the business world, not the end of the world, when a company makes a wrong decision and succumbs, another takes its place with better ideas, a simple market law.

The point here is that I am very grateful to the entire Ubuntu and Canonical community as well, thanks to their work I was able to develop mine. Some people say I should talk more about other systems here, but as I've always tried to explain, I just talk about what I like and use, it could be any other distro, but it happened to be Ubuntu, and thanks to that I got it. many good things for my life, so the least I can do for them in this case is to support the use of a free work tool they provide me, which I use all day (right now, writing this post), and hope for them so that all goes well.

Do you perceive it as something simpler than it sounds? Despite my text, I hope they do not have many Portuguese errors, if you see something let me know, so I correct them as quickly as I can.

Thank you for reading this whole text. Although today is April 1st, there's nothing liar about it. Here are my vows to always want to bring you the best I have, I do not have intense to deceive or deceive, after all I am like you, with work and a simple life like you, the difference that I have a channel and A blog where I can write and speak what I think.

Once again I want to humbly apologize for any offense I may have made, it was not my intention, my intention to attack ideas that I do not agree with and never people. I want to thank the entire Linux community, friends and developers, maintainers and publishers, closer to me or not all over this world that we put into operation every day, than the Linux world.

My biggest dream with Diolinux is to provide a gateway to technology accessible to all people, without discrimination, pure and simple technology, whatever is best to use without distinguishing between operating systems, beliefs, places of residence or whatever. that could be complicated, I hope one day I can realize my dream, I wake up all day and work here for it, it's still far away, but I never dreamed too and have a blog like this or anything else I got .

Many thanks to you all, apologies to all who owe you, and even next time!