If you are a Windows user and have heard of Linux (badly) but still have that curiosity about the system and have not tested it yet because "there is always something that prevents you" this article just for you, we have selected here 7 things about Linux that every user Windows must know. 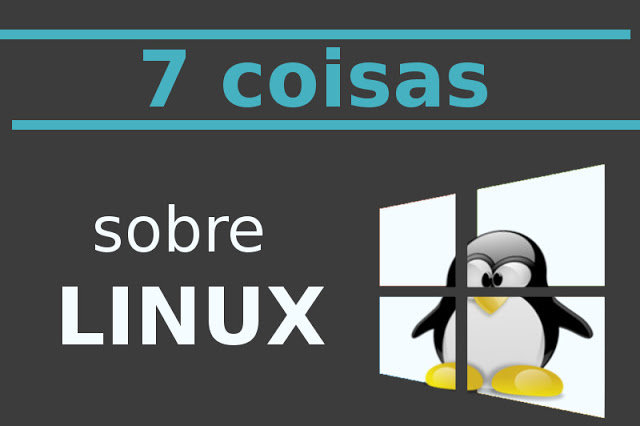 I love lists! They can help break many myths, amazing! So here I separate 7 "things" about Linux that every user who doesn't use the system should know to end their prejudices if they eventually have them.

1 – You can test without installing

Have you heard of "Live CD"? To be more exact today the terms are more like "Live DVD" or "Live Pen Drive", but anyway the logic is the same. Virtually all Linux distributions are distributed in "Live" mode, download the ISO, put it on a media or flash drive and run the system from RAM, that's right! You don't need to install the system to test it, you can run it by trial mode and if you like what you see you can install it, we have a nice installation tutorial here.

2 – Search for something rare driver

It is a common mistake when it comes to Linux hardware support to point out that on the manufacturers' website you usually don't find installation files for Linux distributions, this could suggest that there is no system support, however, in over 95% of the In any case (kicking statistics here, at least that was my experience), the only drivers you will need to download will be the video drivers and in distros like Ubuntu the system itself will help you do that. For everything else basically plug and play, nothing better at?

Package manager like Ubuntu Program Center provides a simple and easy interface for installing apps, reminds you in a way of how to install apps on Android, a "grocery store" where you search for apps, browse categories, etc.

Other people look for tutorials on the internet and find the famous commands in the terminal to install some things like add software repositories and the like, good reason for that because they are very practical and fast and basically all you have to do copy and paste, copy and paste, isn't that complicated? I find it more complicated to dodge "Baidus" installs there, as if that were not enough there are also there .deb packages that work like Windows .exe that you install by double clicking and adding repositories need not be done necessarily with commands, we teach in this post how to install these programs without using commands, Click here to view.

It is true that in old Linux distros it was necessary to use the terminal a lot to do everything, just as even Windows one day was more complicated Linux distros also evolve and nowadays only uses terminal who wants.

One thing you have to keep in mind, the terminal is a TOOL, quite a tool in passing, that you can choose to use or not, distros like Ubuntu and Linux Mint can be operated smoothly using just the interface. , stop prejudice!

5 – No one here hates Windows

Ok, I can't speak for all people, but I can speak for myself. I recognize the qualities that Windows has, and I see that many of the things that people point out as system differentials are actually marketing, a platform program, a game, something like that, not exactly Windows features. , are programs made by third parties.

Hating is no good, I mean, maybe it can have a heart attack … I really advise people to just migrate to Linux when it's a good alternative and marketing issues won't interfere with one's work; From experience, a good Linux desktop distraction satisfies most users as long as they are willing to learn new things, this is a crucial point.

Dual Boot is no big deal either, Ubuntu automatically does this for you at the time of installation, I know several people who use Linux and Windows in dual boot, using Linux for everything including to play and turning on Windows to play some titles that maybe not in Linux yet.

Ah! And if you find a hater / fanboy you know what to do, ignore them that they die of solitude. xD

Much ignorance in the middle of 2015 say that Linux has no games, 25% of Steam already runs on Linux, the only thing to note is which game you want and if it already has native support for the system, the trend with Steam Machines Valve arriving that every day more games come out.

To be honest, Linux still has a lot to improve, it became a gaming system just 3 years ago, not to compare with at least 15 years of full development of Windows games, however, things should evolve next year It promises a lot of new features, new drivers, new graphics API, new kernel and so on.

As number 7 ends my list and I still have a few more points to comment on, let's put them all together here.

Linux is definitely a system for heavy computing, the largest computers in the world run Linux, Google, Facebook, Twitter, Amazon, HP, IBM and even Microsoft servers use Linux, as a reminder that "Linux" is the Kernel and when "Linux" is talking about any system that uses this base, ie basically the internet and most of our current technology runs on Linux, from wristwatches to popular smartphones to space probes. NASA, easier to ask who does not use Linux …

Given the whole mechanism from your computer until you see this article and comment on it, even if you are currently using Windows or Mac OSX, you have probably used much more Linux than another system to read this article.

Another interesting point to trust is, like every project open to the public, open source programs are statistically safer because their eventual bugs are fixed quickly or rarely exploited, their data and files are yours!