Painting books are no longer a child's thing and become a craze among adults. The trend has reached the virtual world and, currently, there are coloring apps that promise experiences that mix creativity and relaxation.

Despite having the same purpose, the applications differ from each other in matters of design styles and available tools. Depending on the program, it is also possible to merge photo with drawing or to transform an image from the gallery or made on the spot into an art piece.

Check below the list of the best coloring apps available for Android and iOS devices.

Colorfy offers design options divided into different categories, such as basics, florals, animals, mandalas, gardens and geometric patterns. Users can also opt for famous paintings, such as Monet and Dal, or paint known places, such as Christ the Redeemer, Statue of Liberty, Eiffel Tower, Pyramids of Egypt, among others.

The app also allows you to create your own mandala or take a picture of a drawing and color it within the program. Anyone who wants to take advantage of all image options and features, such as varieties of brush styles and application of color gradients, needs to pay.

The service offers the option of a monthly and annual plan and allows you to carry out a free trial of the use of all features for a period of seven days.

Colorfy is available for Android and iOS devices.

Unicorn – Color by Number has among its differentials the style of the drawings. They are all the type pixel art and refer to the figures made by computer at the beginning of the 1990s. The images are divided into categories such as animals, fashion, food, games, mandalas, transport, zodiac and many others. 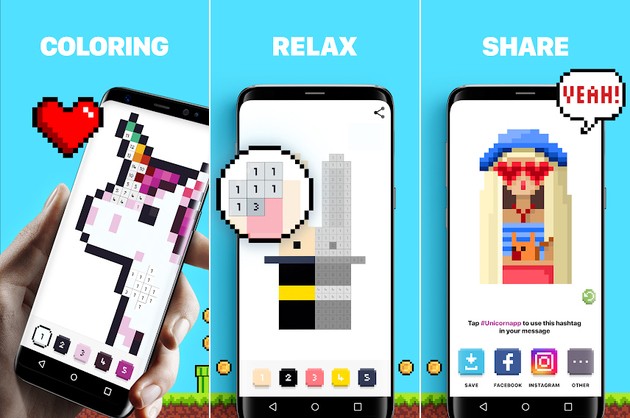 The app offers a less free painting style, since the squares are numbered and each number corresponds to a color. However, if you do not want to, it is not necessary to follow exactly the suggested tone.

The user can also take a selfie through the app and the photo is converted into pixelated format to be later painted. It is possible to choose between the easy and difficult levels. The higher the level of difficulty, the more squares to color will be arranged.

Like Colorfy, Unicorn is a program freemium, that is, it offers some figures for free, but most of them are only available for the paid package. The developers allow you to test the resources for free for three days.

The program is available for Android and iOS smartphones.

3. Coloring Book for Me

despite freemium, Coloring Book for Me one of the apps that offers more options of drawings for free on our list. However, to do so, it is necessary to deal with advertisements and suggested suggestions on the screen.

How to compress video for WhatsApp online in just 3 steps

The number of categories available is impressive. Mandalas, people, anime, animals, comics, flowers, fashion and famous places are just some of the themes. Users can also paint figures of the Om Nom frog and images that fuse drawing with photographs.

Among the resources offered is the possibility to fill a drawing with a photo from the gallery or made on the spot. It is also possible to apply textures to images, such as brick, crumpled paper and noise.

The user can also create his own mandala and transform his photos into paintings. All of your creations can be shared to inspire other users of the app.

Coloring Book for Me is available for Android and iOS devices.

Chamy is another option for coloring by numbers. Every month, it offers users a new design for free. Although the images are not divided into categories, there are a wide variety of themes, such as people, animals, nature, posters, mandalas, among others.

When you open the picture you want to paint, the color palette with the corresponding numbers is displayed. When you touch one of them, the area to be colored turns gray. Unlike Unicorn, it is not possible to color a zone with a different color than the one predetermined by the app.

There is no option to edit the image other than painting. But the amount of designs available for free exceeds most apps of its kind and that should be very pleasing.

Chamy – Paint by numbers is available for Android and iOS.

Despite the name, the app offers more than mandala options to paint. There are also pictures of people, animals and flowers. Although the number of designs available is not very large, the variety of tools is attractive.

Starting with the number of colors and their subtle variations. There are, for example, twelve shades of blue available to users. In addition, it is possible to choose to automatically fill in the spaces or eight brush models. There is also the chance to further personalize the illustration, including stickers and texts.

The other resources offered are the creation of your own mandala, the option of using a blank page to create your own designs and the Magic tool, which reveals an illustration while the leaf is colored freely.

One of the main advantages of Mandala to color over other apps is that all content and resources are available for free. For this, it is necessary to support the display of advertising content. If you don't want to, the developers offer an ad-free paid version.

The application is only available for Android phones.

If you want a different creative experience, check out our list of apps that turn your photos into drawings. For those who prefer to let their imagination run wild in their own photos, you will be amazed by these apps for writing in pictures!