With the fact that the popular app Giganima does not yet exist for iOS, iPhone and iPad users need to find similar apps when the idea is to have anime streaming on their hands. 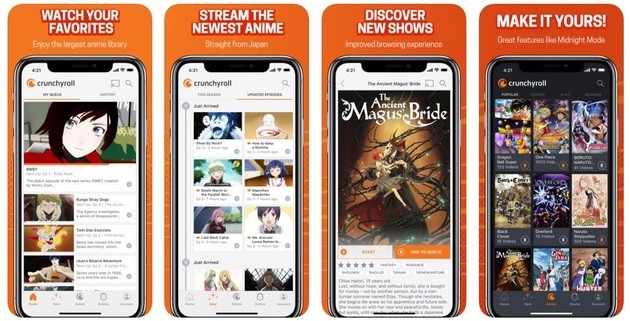 Probably one of the best known, Crunchyroll is a streaming service for Japan's most popular anime. The platform offers new content, such as recent ones Boruto: Naruto Next Generations, The Ancient Magus' Bride and Dragon Ball Super, beyond the darlings Attack on Titan, Cowboy Bebop, JoJo's Bizarre Adventure, among many others.

free and requires no subscription. The option to subscribe to Premium, however, can be attractive to big anime fans, as it makes new episodes available just an hour after they air in Japan and allows content to be viewed on Apple TV, XBox and PS4.

Like the previous ones, it offers varied animes, both classic and Simulcasts (short for "simultaneous broadcast" in English, or "simultaneous transmission"), that is, contents that are being broadcast at that moment in Japan.

In addition to having a catalog made up of hundreds of animes, the app also offers original films (ranging from suspense and horror to documentaries) and varied TV programs. It also provides the option for the user to make his Watch-list, where he can save the content he wants to watch later.

How to clear application cache on iPhone and free up space

In addition to streaming various anime episodes, the app also offers reviews, notes, stories and other content about Japanese programs.

Through the app, you can also download wallpapers from your favorite program, visit the website for each content and get in touch with some of them.

The best apps to read HQ online on Android and iPhone

Has already found the best streaming for you, is your anime up to date, but would you like to have someone to talk to about the content? Kitsu Anime is a social network focused on this.

The application does not offer streaming options. He meets in one place, fans of the genre to discuss episodes, recommend and receive recommendations about other animes, check reactions to new content, among other resources.

For those who, in addition to animes, wish to stay up to date on reading the manga, Crunchyroll also offers an option. Manga by Crunchyroll makes content available shortly after its publication in Japan.

Are titles like Attack on Titan, Fairy Tail, Coppelion and Space Brothers.

Here the proposal is to offer streaming for those who are also interested in the famous Japanese, Chinese and Korean novels and films.

Running Man, Im Not A Robot, Goblin, My Secret Romance, Revolutionary Love, Tribes and Empires and Ten Miles of Peach Blossoms are among the options that can be seen. The app even offers offline streaming.

Proudly from Ceará, he graduated in Journalism in 2012 from the University of Fortaleza and is currently a Master's student in Communication, Art and Culture at the University of Minho, in Portugal. He has been working as a reporter since 2010, but a card geek since he was a child.