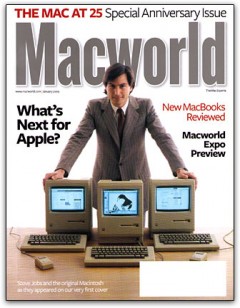 The last issue of the North American magazine Macworld, which marks the 25th anniversary of the Mac (and the publication), has just come out. On January 24, 2009, Apple's flagship product completes a quarter of a century of life.

First of all, there is no reason to create high expectations about the milestone. Apple as a company turned 30 years old on April 1, 2006, but the date has passed completely by. In other words, Steve Jobs does not much follow these commemorative traditions. Still, it is still a good opportunity.

The website Archintosh released some forecasts: the first of which would be an updated version of the first aluminum Macintosh, a limited series, with a complete emulator of the classic software. The second is a ?Mac Pro Ultra?, possibly the fastest computer in the world, which would guarantee such a title for at least one year. Finally, a new ?Mac touch? is Apple's answer to the growing popularity of so-called netbooks.

The first of the ideas certainly reminds us of TAM (aka Twentieth Anniversary Macintosh), one of the occasions when the company took advantage of one of these dates to launch (in March 1997) a commemorative product. The machine, however, sold for an absurd $ 7,500 and was therefore a sales failure.

My bets? Who knows, an iMac with a different look and a 25-inch screen; or a redesigned Mac mini, quite stout, but still super compact, whose features are used to promote it via a graph of technological evolution since the first Mac; but I like the idea of ??a special Mac Pro, with such a hand-picked configuration by Steve Jobs, unique, and with an unbeatable promotional price that sells like water.

Well, we may not see anything that even looks like the ideas above, but hopefully at least some special image will paint on Apple.com on the 24th: the Mac deserves it. What are your bets?