No one knows all languages, so using translation services is always necessary. The best known and most popularly known as the best Google Translate, but there are several alternatives to it.

Read on and check out the best options if you don't like Google's translation service.

Anyone who wants to translate words and texts can take advantage of Linguee, which, in addition to translating, is also an excellent dictionary. It has a fast and intuitive interface, just type a few letters of what you want to find and the service already finds translations.

Furthermore, Linguee also offers examples of use in the real world of all words, in a contextualized way. And if you are using it while learning English, you can count it with pronunciations. It has a version for computer browsers, through the link, in addition to translation apps for Android and iOS.

Another alternative to Google Translate is Microsoft Translator which can be found on Bing. It supports more than 60 languages ??and is very complete. In several cases, the translations can be even more accurate than those found in the most famous competitor.

It allows translation of texts, images, conversations in real time, offline use and much more, all completely free of charge. It is available for use on the Bing website, in addition to having apps for your smartphone.

One of the best known options on our list is Babylon, most famous for its online dictionary. However, it also has an excellent translation tool with a program to download to your computer. It integrates with the Office suite and supports 77 languages, being really complete.

It allows you to translate entire documents with just one click and the largest dictionaries, such as Oxford and Merriam-Webster, are integrated. Start using it through the link.

Another possibility for those who want to translate their texts using DeepL, from Linguee. It uses neural networks to improve the translation results, allowing you to save the results in text documents for easier sharing.

In the free version, it is possible to translate only 5000 characters at a time, but it is worth remembering that the translation results are at least as good as many, if not better, than those of Google Translate. Follow the link to see more and use it!

Among the alternatives to Google Translate is Unbabel, a paid service. He uses neural networks and machine learning, just like Google Translate and DeepL, but then passes by a human who will proofread and edit his texts.

Free of charge, it offers only 150 characters, so you can have a preview of what you can do with it. Supports 29 languages ??and 70 language pairings. Go to the official website and find out everything.

A really good translator is Translate.com, which uses Microsoft services but supports more than 100 languages. It has speech recognition, allowing you to speak instead of typing instead of using the keyboard.

Free of charge, it allows you to translate only 200 words at a time. In addition, it offers, like Unbabel, translation by humans and even translation for companies, really professional. See everything by following the link.

A very good indication is Reverso, which has a functionality very similar to Linguee. Also using neural networks, it shows contextualized results, which helps you a lot in finding the right term to use.

It has support for 15 languages, translation of documents through upload, integrated dictionary, suggestion for synonyms and even integrated spell check. It is also one of the best translation apps for smartphones and can be found for use on your computer through the link.

We also have WordReference among the alternatives to Google Translate. Having been launched in 1999, it has become extremely complete and offers a translation tool with a really powerful integrated dictionary.

It only translates words, not allowing texts or pages, which turns out to be a very negative side. It has 18 language options for you to translate. Go to their official website to see more.

Completely free, Apertium is an open-source tradition platform with a focus on translating related languages. However, it also offers translation pairs like English-Catalan.

It allows you to translate everything you want, be it words, texts, pages or even documents. And, even better, if you understand programming you can help with its development, to make it even better. Check it out on the official website.

Finally, we have Language Translator, which allows you to translate more than 70 different languages. it is really easy to use, just type whatever is translated to receive the result.

It is also necessary to select both the source language and the target language (which is almost always only English). Follow the link and start using! 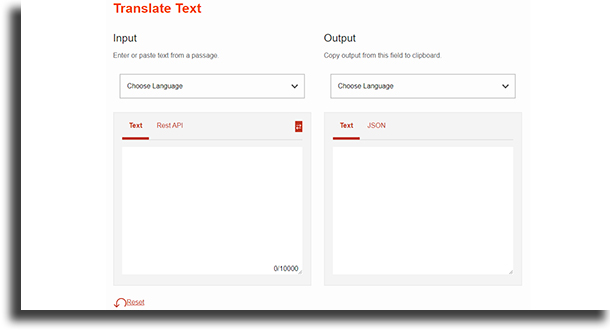 So, what did you think of our selection of alternatives to Google Translate?

Leave in the comments if you already knew them, if you use any of them or if you prefer another one. Don't forget to check out our selection of the best translation apps for Android yet and our guide on how to use the Google Translate extension in Chrome!