Emoji get new options for icons, adaptations and even redesigns every year. The changes are varied and range from details to technical and gender representativeness. The inclusion of the designs on the iOS keyboard by Apple in 2011 promoted a different mode of communication, followed by other manufacturers. And so, the figures were in the public's taste, although they have existed since 1995. Remember below which symbols have changed over time and how they are now.

Windows 10: how to enable shortcut for emojis on PC

In April 2018, Google, Facebook and Microsoft decided to replace firearm emojis with a water gun. Android users are expected to receive the novelty as of version 9.0 of the system. On Windows, a date has not yet been released, but there is a post with the redesign in the company's official Twitter account. The move was announced amid the debate over arms regulation in the United States. The issue came back after a school by an armed former student in Florida in February, which resulted in 17 deaths. 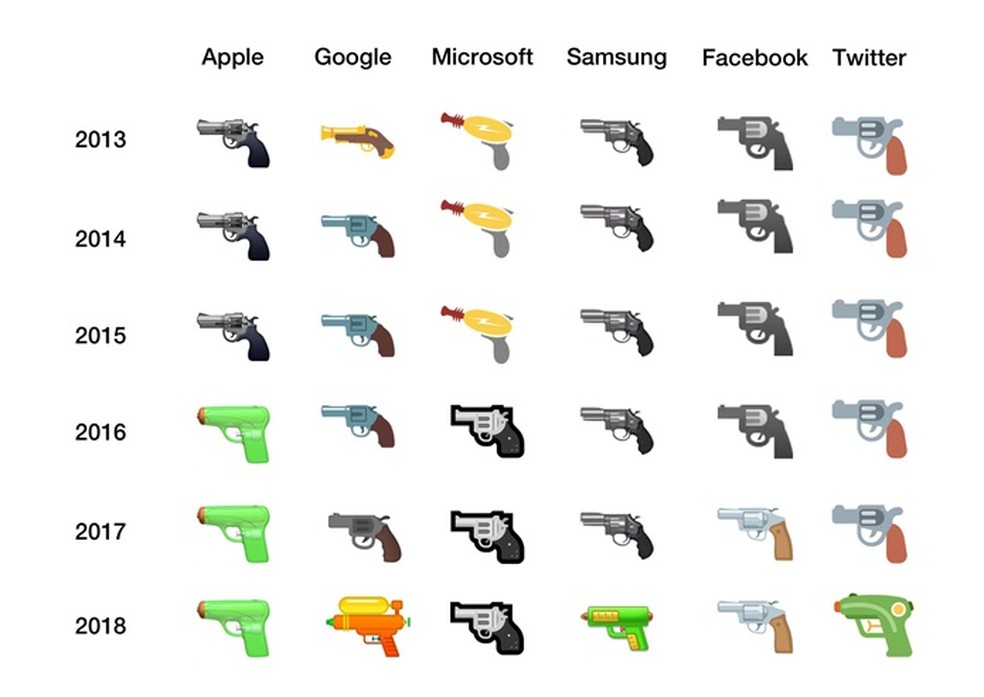 Apple was a pioneer in replacing the gun with the toy in 2016. Subsequently, it was followed by WhatsApp, Twitter and Samsung. Interestingly, until the same year, Microsoft offered a more playful icon, a ray gun, but switched to a more realistic revolver design.

Yes, foods are controversial in the universe of emojis. So much so that some of them were transformed because of users' dissatisfaction. Until 2017, Google's hamburger emoji had a serious error: cheese was under the meat, while all other companies had it on top. Sundar Pichai, CEO of the search giant, joined in the fun and, at the time, made a tute in which he said he agreed with the issue and stopped everything to solve the problem. 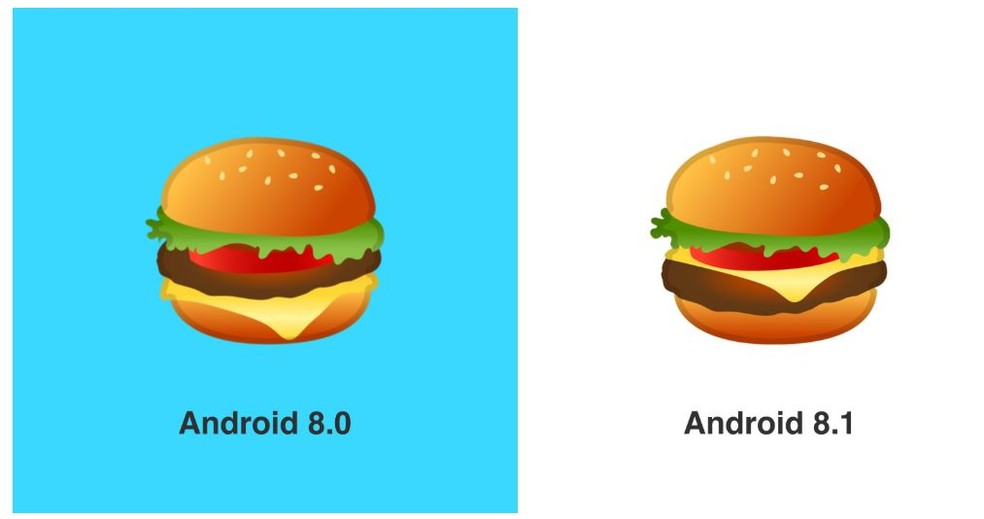 In the same period, beer design was also questioned. In the Google version, despite the liquid being half full, it still had foam on the top of the mug. In addition, the yellow tone chosen did not seem to please much either. Although Pichai promised urgency, the change in the pair only took place two months later, in December last year. 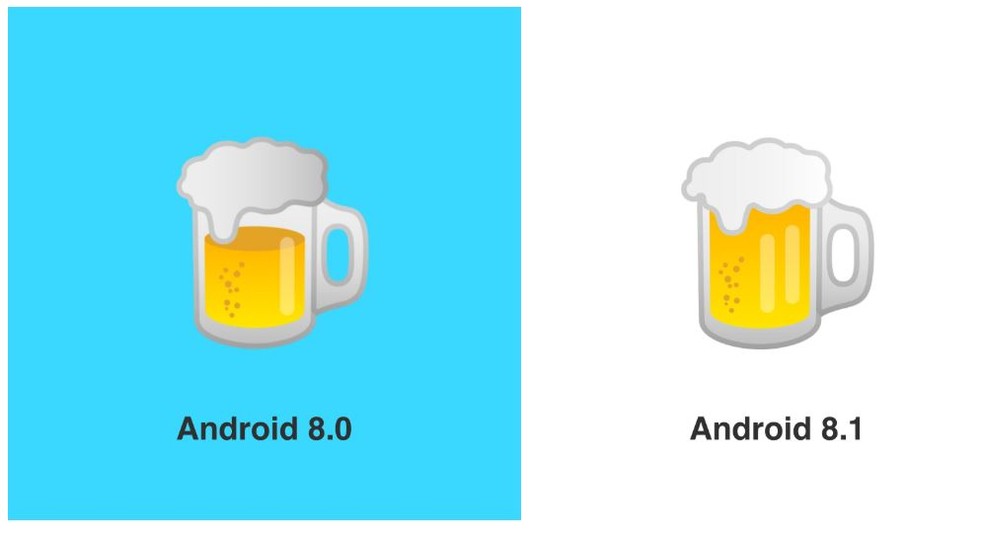 The cookie was also a controversial subject. Unlike other developers, Samsung displayed a cream cracker instead of the chocolate chip cookie. The change only came in February of this year, with the upgrade from Samsung Experience 8.5 to 9.0.

Another reviewed food was paella. The Apple cone featured ingredients that did not match the original recipe for the dish created in Valencia, Spain. Therefore, a few months after the launch, the emoji with prawns and pears was replaced by one with chicken and lima beans (or greens). 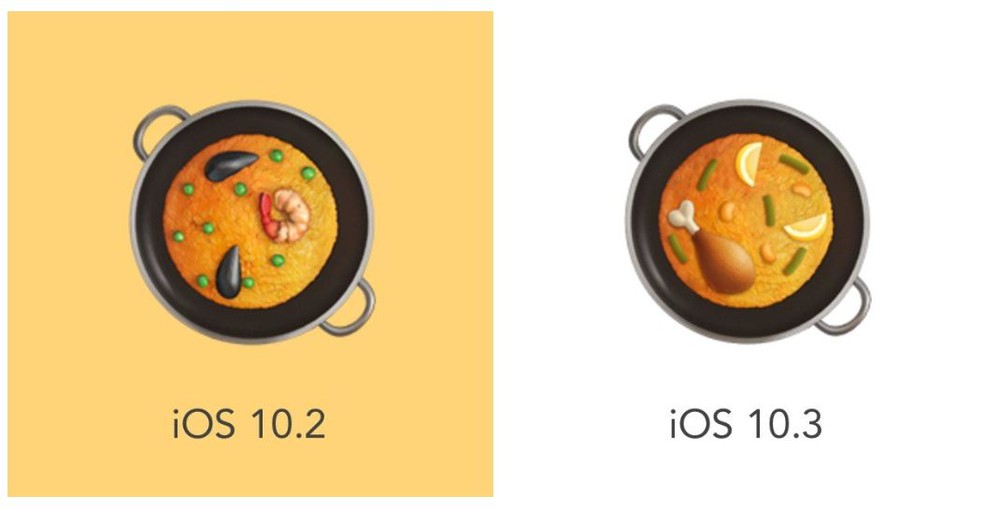 Representativeness is an important topic in the emoji chart. After all, the drawings are used to facilitate the expression of feelings in conversations. This way, probably, a black person would not identify with a blond doll with light eyes, for example. Therefore, in 2015, WhatsApp underwent an update in which all human figures were given six skin tone options. In addition, the characters started to be displayed, by default, in a yellow color. Later, other manufacturers followed the change. 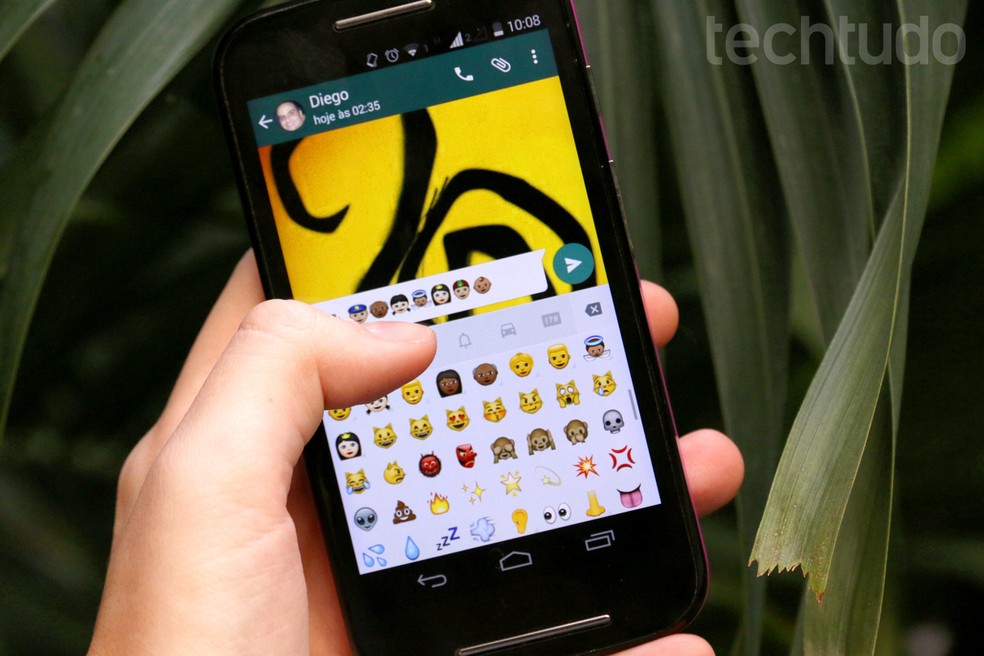 Despite the fear that ethnic diversity could be used negatively, as a way to promote racial prejudice, a survey revealed the opposite result. The study carried out by the University of Edinburgh, in the United Kingdom, showed that most people changed the emoji's hair tone to approximate their real color. Adherence would have been greater among dark-skinned people, which, according to the survey, demonstrates the importance of action for personal online expression.

The update of iOS 9.1, in 2015, brought a fundamental novelty regarding representativeness: families with same-sex couples. Core icons made up of father and mother, two parents and two mothers were made available, varying only in the gender of the children. It has also become possible to share both straight and gay couples. The change was gradually welcomed by other manufacturers. However, all designs were kept in the standard yellow color, with no choice of skin tones.

Microsoft made available the combination of 52 thousand types of families in its emojis Photo: Reproduction / Emojipedia

Until, in August 2016, Microsoft started to allow 52 thousand family combinations, with the inclusion of interracial couples and single parents and mothers. A year later, it was Facebook's turn to join the emojis of more diverse relatives.

The space of women in society was also the subject of debate in the emoji universe. In May 2016, Google launched icons of female and male professionals in different areas, even for those in which men predominate, such as engineering and public security. In September of the same year, another update, this time from Apple, focused on gender equality. The doll in the pink blouse who performed a series of movements was given a more neutral color and a masculine version.

6. Big heart and sizes on WhatsApp

WhatsApp emojis gained a different size, according to the number of cones sent alone in the same message, as of October 2016. Using only one picture (without text), it started to be displayed in a larger size in relation to the sending two images, and so on. From four drawings, the dimension remains traditional, from when the symbols are sent accompanied by a sentence.

However, in 2015, the messenger had already tested an emoji with different size: the red heart. Since then, when the icon is sent alone, it becomes a big pulsating heart in the middle of the canvas.

Samsung is known for its polemic emojis. Until Samsung Experience 9.0, its icons were very different from those of other companies, with communication difficulties. Before, the famous "roll of eyes" did not represent the desired irony, while the smile "without grace" looked more like a person with anger when making "pout".

The problem was different in 2016: the symbol represented by the crossed fingers had six fingers. The anatomical error was only corrected months later, which gave the Korean company's emoji at least a unique character.

Google redesigned its emojis and extinguished those of the "blob" style, an acronym in English for basic large object, in literal translation. The change announced at Google I / O 2017 was not very well received by fans of the looser dash style, replaced by the circular and more consistent shape present in Apple emojis. The purpose of the exchange was to make the cones closer to the standards of other manufacturers and to reduce communication noise between different devices.

9. Animojis: the evolution of emojis

The launch of the iPhone X brought percussion to a feature, until then, available exclusively on the device: animojis. The figures in three dimensions reproduce the users' facial expressions and the sounds made in small videos. The application is capable of reproducing 50 muscle movements through the device's front camera.

What is your favorite social network? Comment on TechTudo's Forum. 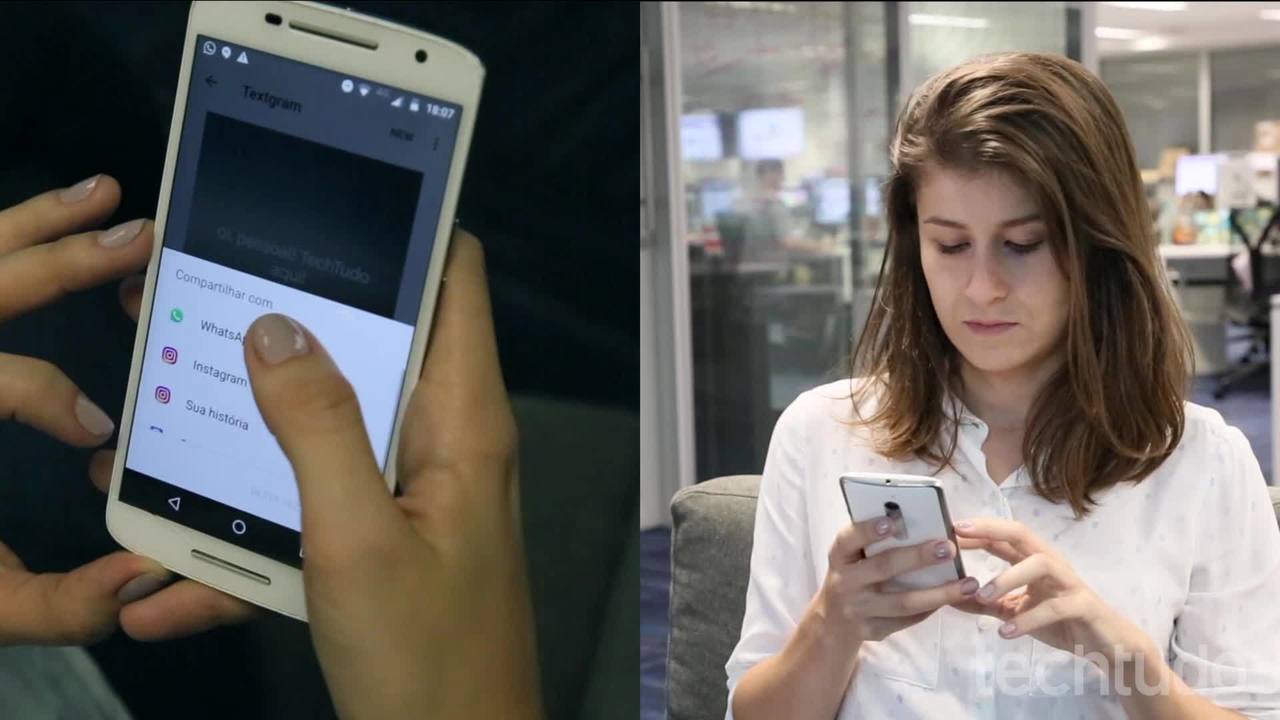