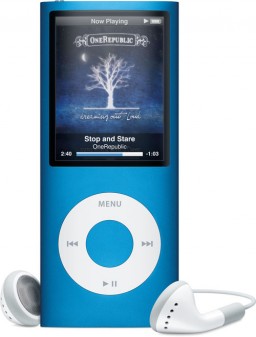 First, Apple revolutionized the multi-touch market with the introduction of the iPhone and iPod touch. With the continuation of its research in this area, the company was able to bring this same revolutionary technology to the trackpads of its notebooks. But with a patent application recently discovered by AppleInsider, it seems that the Cupertino-based firm does not want to stop just by: it is working on concepts to bring multi-touch to the rest of its line of iPods that still use the famous Click Wheel.

Although the iPod touch is a sales success and many believe that it will be the basis for future iPods, Apple is still betting its chips on models with the Click Wheel not in the traditional way as we know it, but with the evolution that recognizes gestures multi-touch.

The fifth generation of iPod nano, which is due to be launched in the next quarter, will have a built-in digital camera, a larger screen and a smaller Click Wheel than the current one. It is also possible that this new generation of nano already incorporates the technology present in this patent, which describes methods for detecting ?the entry of gestures that cross the center of the scroll circle and for detecting the entry of multiple touches?.

The patent application, which has 38 pages, demonstrates a ?scroll wheel multi-dimensional capable of detecting moving objects, such as a finger, as it performs a rotational trajectory and also in linear ways, passing through the center of the scroll circle ?. This new generation will also be able to "feel" more than one object at the same time, such as multiple touches and movement.

The applications of this new multi-touch Click Wheel can be diverse. An example would be to switch between disc covers just like dragging a finger on the scroll circle. Multi-touch gestures, such as placing one finger in the center and dragging another by the rim of the wheel, could activate the zoom in images or photos.

Check out another trailer for the movie “Steve Jobs”, starring Michael Fassbender