The Gartner numbers released today on the computer market kept Apple stable at fifth place among the largest manufacturers in the industry in the United States, but the company's sales in the fourth quarter of 2009 grew 23% over the same period in 2008. Apparently , Gartner's projections were slightly more encouraging than those of IDC (released yesterday), but this also did not represent any significant growth in its domination of the computer market. 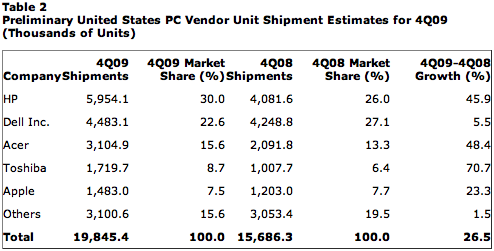 On the other hand, estimates for the total number of computers sold throughout 2009 were quite different for Gartner than they were for IDC, which placed Apple as the fourth largest manufacturer of the year. For Gartner, the top five PC makers during the past year were Hewlett-Packard (HP), Acer, Dell, Lenovo and Toshiba the latter, the fastest growing company in the industry during the fourth quarter, selling 70% more than than in the same period in 2008.

For these and many other companies in the computer market, 2009 was a last year marked by a rapid recovery from the financial difficulties experienced by the world between the fourth quarter of 2008 and the first quarter of last year. If we add the sales of all manufacturers together, almost 306 million PCs were sold in 2009, 5.2% more than in 2008.