The AirPods finally they reached the hands of consumers. It is time, then, to show some details of the headphones that are not yet widely known, which have not been commented on by Apple in the presentation of the product or on its official page.

When you pair the AirPods with the iPhone, the headphones automatically connect to your Apple Watch too so you can switch between them in a very easy way. In addition, when pairing the AirPods with the iPhone, it also appears on the iPad and Mac thanks to iCloud synchronization even though on tablets and computers you have to select the headphones in the settings to use it.

But back to the AirPods' relationship with the Apple Watch, if you get a call while you're walking down the street with your iPhone in your pocket, for example, you can answer by the watch. That, obviously, everyone already knew. 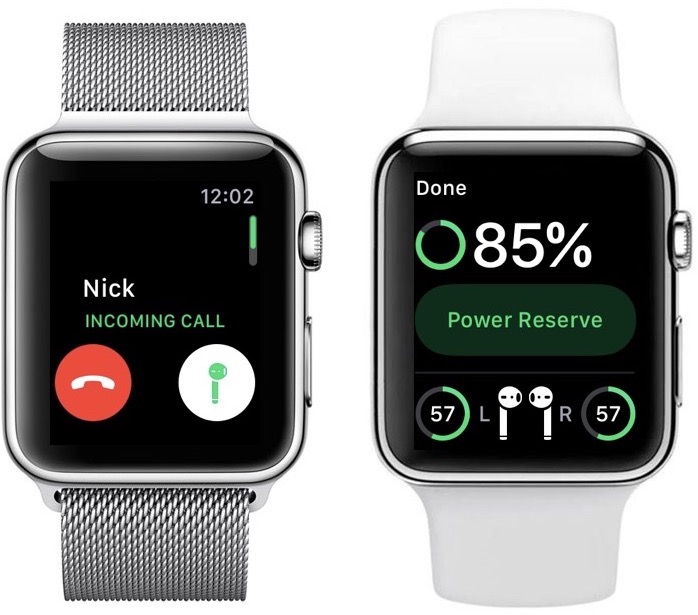 The novelty here, that the Apple Watch shows an AirPod cone instead of the traditional green cone of answering the phone. Another detail is that, by sliding your finger from bottom to top on the Apple Watch home screen (on the display) and touching the battery icon, watchOS shows not only the battery information of the watch but also the two AirPod units.

Information on the iPhone

On the iPhone, of course, it is also possible to check in a very simple and quick way how are the batteries of the AirPods and their charging case.

The cool thing is that iOS shows the status of batteries in different ways when AirPods are paired; when you open the case with the AirPods inside (first and second image); when you keep the case open but remove it from the headphones (third image); and when you have your headphones on and your case is closed.

You can also ask Siri for the battery status of the headphones she answers.

One thing that iOS does not show is the AirPods battery level in the "status bar", as it does with other Bluetooth headsets:

Folks with AirPods: Do you see battery life icon on your iPhone, like you would with regular BT headphones (upper right in the pic)? pic.twitter/PgKkTDvAr1

Perhaps it is because it would be necessary to show up to three battery levels (each AirPod and the case), but this theory was soon overturned when they found that the battery level of the Powerbeats3 Wireless is also not shown. Does it have to do with a limitation / feature of the W1 chip, used in both AirPods and Powerbeats3? The debt remains.

Using only one AirPod

A user discovered something cool. The AirPods' batteries were exhausted when he received a call and answered by the headphones. What did he do? He took one out and put it in the charger case (if you don't know, 15 minutes of recharge provides 3 hours of use, so a few minutes of charging is enough for you to use the headphones to end a call, for example). When the battery of the other phone started to die, he simply switched to the one that was partially recharged and continued talking on the phone (all without hanging up and without the person on the other end of the line noticing something). ?

If you decide, for some reason, to use only one phone instead of both to listen to music (if you are running on the street and want to hear the traffic too, so as not to have an accident) or watch a video, the signal is automatically transformed into mono so you can enjoy everything in a better way.

Imagine that AirPods (wireless) work the same way as EarPods (wired). What happens if you are already playing a song on the iPhone and connect the EarPods with Lightning cable to the connector? The music is automatically played on the headphones; if you pull the cable out of the connector, it stops.

The same thing happens with AirPods: if you are already playing something on the iPhone, iPad or Mac and connecting the headphones, everything starts playing on the AirPods; if by chance the connection ends, the content stops.

The differences between AirPods and EarPods are two: due to the sensors of the wireless headphones, if you are listening to something and momentarily remove one of the earphones, the content is paused; if you put it back, it will play again. As you no longer have a wire with a button to pause / give play, that was the way (smart, in my opinion) for Apple to solve the problem. Which brings us to the second differentiation: if you tap twice on any of the AirPods, Siri is called up and you can interact with the assistant any way you want (including asking her to turn up / down the volume).

The annoying part is that this voice control done with the help of Siri requires constant connection to the internet (if you are without, nothing can increase the volume through it since any and all types of assistant requests go through Ma's servers). Not to mention, obviously, the lack of a simple way, either by gestures (or by tapping the headphones) to adjust the volume without having to resort to Siri or a device (iPhone or Apple Watch, for example).

If you have a trip scheduled or know someone who is going to the United States and is planning to purchase AirPods, know that the iStockNow website now shows the availability of headphones in Apple stores across the country.

In Brazil, at least at Apple VillageMall, inventories are optimal as the reader informed us Igor Torres.

We received reports that AirPods are completely depleted in two Brazilian Apple stores. At VillageMall, they arrived yesterday and disappeared from the shelves today; at Morumbi, apparently they arrived on the 20th, but just yesterday there were no more headphones available.