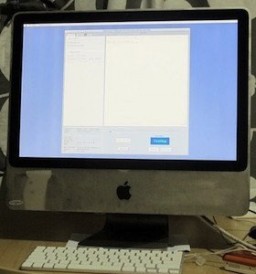 It is not the first time that such an incident has occurred involving the resistant aluminum iMacs, but this case was discovered by TUAW somewhat unusual: in Malaysia, a wave of criminal fires has caused enormous damage to companies in the vicinity of the country's capital. However, in one of the fire-damaged offices, firefighters were able to find two units of Apple's all-in-one desktop still in operation.

Most curious, the machines have not only withstand the fire, but also the strong jets of water used to extinguish the flames. Of course, they are no longer intact with the exterior (see image opposite), but apparently they can be used without problems.

The model in question was one of the first 20-inch aluminum iMacs to be produced by Apple. They were launched in August 2007 and subsequently underwent a visual makeover in late 2009.

SquareTrade releases reliability report between smartphones; Apple appears in front and behind

Plagiarism from a forgotten future? WWDC 2017 art has suspicious similarities to a poster from years ago, but it's not that simple …