Leading manufacturer of components for mobile devices, Qualcomm today announced a new generation of its Snapdragon family of processors, which uses a 28 nanometer architecture yes, more advanced than the 32 nanometer that Intel is putting on board notebooks at the beginning of this year. The new CPUs will have up to four cores of computational processing and will reach 2.5GHz frequency. 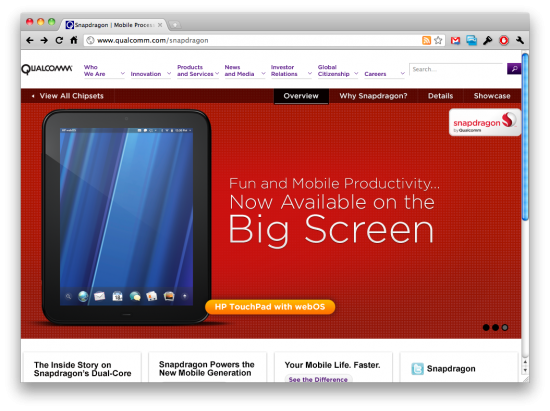 Compared to the current iPhone 4, Qualcomm's hardware is 2.5 times faster, being able to give rise to smartphones and tablets with quite high processing power for complex applications. In addition to the processor, the new Snapdragon line houses Wi-Fi, GPS, Bluetooth, FM, NFC and graphics with four 3D cores in one solution on-a-chip system (SoC) is quite versatile, being interesting for devices intended for multimedia.

The company hopes to market the first chips dual-core of the new line later this year, while the most advanced, with four cores, will be on production line in the second half, for sale in 2012. Among the potential manufacturers of smartphones and tablets that may use it are HTC (which produced the first Nexus phone for Google) and HP, which migrated to Qualcomm in the new line of devices with webOS, recently announced.