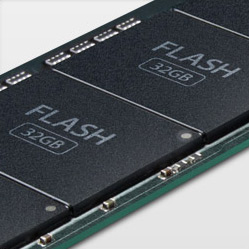 When launched in late October last year, MacBooks Air were equipped with solid state drives from Toshiba, identified as TS128C according to iFixit itself shown on its disassembly of the laptop.

For some time now, however, Apple seems to have replaced the component with a Samsung SSD, identified as SM128C. This would not be surprising to us end users if it did not provide certain performance gains for the machine.

According to the AnandTech, turning the ?AJA System Test: iSebas / DiskWhackTest? the machine's reading rate increased from 209.8MB / s to 261.1MB / s, while the write rate went from 175.6MB / s to 209.6MB / s. Samsung's new SSDs also support something known as Native Queuing Command (Native Command Queuing, in English, or simply NCQ), which the previous ones did not support.